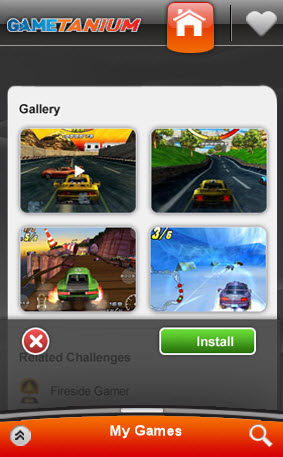 Mobile game discovery is a huge problem, since it’s easy for great games to get lost in overcrowded app stores. So Exent is giving mobile games a boost today with its GameTanium Mobile all-you-can-eat subscription service.

If consumers like the $4.99 a month service, then mobile carriers can use it to barge back into the mobile commerce business, taking back a role in selling consumer apps that platform owners such as Apple took away from them. Game makers, meanwhile, could use the service get their games noticed by a larger crowd of gamers.

“We want to solve the problem of the discoverability of games on Android,” said Zvi Levgoren, chief executive of New York-based Exent, in an interview.

Game discovery was one of the big issues we highlighted at last week’s GamesBeat 2011. With 18,000 games in the Android Market, it’s hard to get noticed. Since GameTanium highlights a smaller number of high-quality games, it makes life easier for consumers who are looking around to find better games. 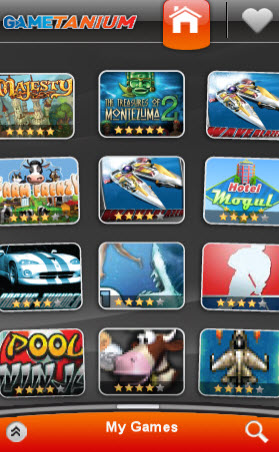 The company unveiled the service at the start of the Casual Connect show in Seattle this week, where mobile, social and casual game companies are gathering for an annual event.

The “games on demand” service offers unlimited game play of some of the most popular games on Android. The titles include hits such as Farm Frenzy, Speedx 3D, and The Secret of Grisly Manor. Consumers can try it out for free for now.

Exent currently provides 2,000 PC games on demand on the web. Its partners include Verizon, Mediacom, and T-Mobile. That service has more than 1 million subscribers and its average lifetime value of a customer is $100. Now with the extension to mobile, Exent hopes game developers will see more engagement, higher average revenue per user (ARPU), more brand loyalty and customer retention.

Exent is the PC games on demand provider to many of the world’s leading operators, including Verizon, Mediacom, and T-Mobile. With the launch of GameTanium Mobile, operators can extend their brand, games offering and subscriber engagement to new screens, increasing average revenue per user (ARPU) and strengthening brand loyalty and retention.  Jason Henderson, games and music services product manager at Verizon, said that his company has offered games through GameTanium on the web since 2005 and he looks forward to its mobile counterpart. 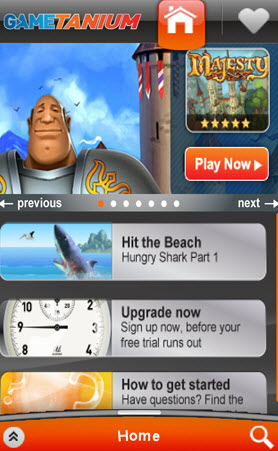 Mobile carriers such as Verizon Wireless used to be kingmakers in mobile game commerce. But Apple bypassed the carriers by setting up the App Store. Now, by licensing this Exent service, mobile carriers can get back in the game. GameTanium Mobile has built-in services such as programming expertise, carrier channels, brandable user interfaces, and a good billing system.

“We provide mobile operators with the type of service that lets them re-inject themselves into the mobile value chain,” said Levgoren.

Since the service is available as a subscription, the $4.99 a month pricing will let mobile game makers get a higher lifetime value from their games, even though the share of revenue they get from the subscription fee is lower at first. That’s because the subscribers are expected to pay for the subscriptions for a longer amount of time.

Google’s Android Market is in much need of better monetization. There are a lot of free apps that are monetized through advertising. But services such as GameTanium aim to reduce the hassle users have to go through to find good games. And GameTanium Mobile is designed to be similar to a subscription service like Netflix, Levgoren said.

Levgoren says that Android Market is mostly comprised of demos, spam, broken apps or boring games. That’s why GameTanium focuses on the best on Android. Daria Yurashanskaya, director of partner relations at Alawar, said that the mobile service could greatly increase the number of people playing the company’s Android games.