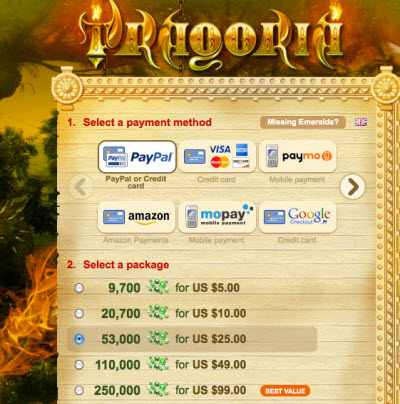 Paymentwall said today that more than 1,000 developers have adopted its alternative payment methods for virtual goods in social games, including special ads known as offers.

By creating new payment options for gamers around the world, Paymentwall can help expand the overall game business.

“We are filling a void left by the other companies that have moved on to other strategies,” chief executive Honor Gunday said in an interview. “We are trying to become the global payment platform.”

As its name suggests, San Francisco-based Paymentwall presents a full page of payment options to users when they want to buy something.

As you can see from the picture, you can pay via PayPal, credit cards, mobile payments such as Paymo and MoPay, Amazon payments, or Google Checkout. Users can also make payments by choosing advertising offers, where they can get virtual goods in a game if they perform an action like signing up for Netflix.

Offers were a big business on Facebook until the “scamville” scandal came along in the fall of 2009, when offers got a bad name because some scam artists were using them to sign users up for monthly services that they didn’t realize they were paying for. Facebook cracked down and whittled down the number of approved offer vendors. And starting on July 1, Facebook transitioned its app developers to paying for goods with its Facebook Credits virtual currency, which can be purchased through a variety of means. But Paymentwall is focusing on non-Facebook web-based games and apps.

“All these other companies have shut their offer businesses and the developers have been left with nothing,” Gunday said. “Our monetization has gone up as a result.”

Gunday said it is good to have a lot of payment options because many web sites get international traffic. Few payment options work everywhere. PayPal, for instance, has its biggest base of users in the U.S.

Most recently, Paymentwall has added payment partnerships in China, Brazil and Russia. Facebook is not dominant in those territories. Paymentwall will open new local offices in Germany and Turkey in the coming months. Paymentwall can process more than 50 currencies and can localize its wall to 20 languages. Some developers reported a ten-fold increase in monetization in territories such as Southeast Asia, Turkey and Brazil, thanks to Paymentwall, which now reaches 200 countries.

Paymentwall has 32 employees and plans to build its workforce to as many as 50. The company was founded in 2010 and competes with rivals such as PlaySpan (bought by Visa) in payments and TrialPay and Sponsorpay in offers.