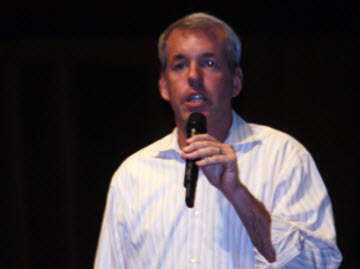 Zynga may look like the all-powerful, dominant game publisher on Facebook. But Facebook wants you to know it’s not too late to get in on the action: There’s room for more game companies on the social network.

“It’s not a market where 10 apps get all of the users,” Ryan said in a speech at the Casual Connect conference in Seattle on Tuesday. “The market is growing like crazy and you can participate in it.”

Ryan said that it makes sense that more types of games will succeed on Facebook in addition to Zynga’s city-building and farm-building games. He noted that cable TV now profitably supports more than 650 different TV channels.

The huge emphasis on Zynga’s games has obscured the fact that there are only two “hidden object” games on Facebook. Those include web games like Mystery Manor and Disney’s Gardens of Time, where players have to click on a screen in order to uncover a hidden treasure. There are scores of such hidden object games on casual game web sites.

“I think that the market could support more than 50 or 100 games in this genre alone,” Ryan said.

Another emerging category is casino games. There are other “mid-core” games emerging with lightweight combat options that appeal to both hardcore and casual fans. These include Zynga’s Empires & Allies, Kixeye’s Battle Pirates, and Digital Chocolate’s Army Attack. Kabam has also pioneered the hardcore game category with strategy titles like Glory of Rome or Dragons of Atlantis.

Other big holes in the line-up include hunting games. There are few or no fishing games, Christian games, urban games, role-playing games, fighting games, romance games and there are only two first-person shooting games. The romance category itself is a $1.5 billion entertainment market, and there’s potential for related games.

Ryan encouraged companies to move into these genres, rather than take on the industry giant. Ryan said Facebook has a team working on game platform features now and it will improve game features over time.

He noted that social game companies such as PopCap Games, Playfish and Playdcom have seen exits that generated $1.7 billion in purchase prices in the past year or so. He said that the market is concentrating into social networks such as Android, Facebook, Apple, DeNA, Gree, and perhaps Chinese companies such as Tencent. Ryan argued that Facebook’s market has advantages because of its massive scale, discoverability of social content, monetization, and continuous improvements.

“It’s easy to forget that this market is less than four years old,” Ryan said. “It’s too late to clone a game that is a clone of another game, but there is plenty of opportunity.”