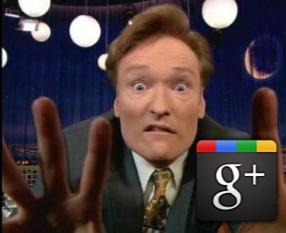 Google plans to increase the number of celebrity members on its new Google+ social network by developing a way to verify their identities, reports CNN.

The company hopes that having celebrities join and use Google+ will help publicize the three-week-old social network, according to company e-mails obtained by CNN.

While Google+ is typically compared with Facebook, Google may instead be choosing to duplicate Twitter’s successful strategy of attracting celebrities. Twitter has proven that famous users can help a social network to grow.

In 2009, actor Ashton Kutcher and media mogul Ted Turner competed in a highly publicized race to reach a million Twitter followers. Also, the social network was instrumental in propelling late night talk show host Conan O’Brien’s career forward after he parted ways with NBC. And more recently, actor Charlie Sheen joined Twitter after being fired from CBS sitcom Two and a Half Men — gaining 500,000 followers in one day. In all three instances, the microblogging social network became more prominent in the public eye.

Yet, an identity validation process is essential if Google+ wants to leverage publicity by celebrities that join the service. Validating accounts would prevent impostors from posing as famous personalities. It could also help legitimize celebrity accounts much in the same way Twitter does by featuring a “verified” stamp of authentication.

A company spokesperson declined comment to VentureBeat about both Google+’s pursuit of celebrities and the status of verified accounts. However, it’s safe to assume that the company will start verifying celebrity Google+ accounts at some point in the near future — perhaps along with the public launch of Google+ planned for later this month. 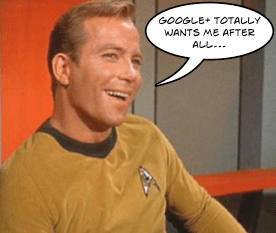 The lack of verification may already be ruining Google’s chances of gathering high-profile celebrities. For instance, actor William Shatner had his profile removed shortly after joining. Some speculated that the lack of identity verification caused users to report the account as fake.

“My Google+ account was flagged for violating standards. Saying hello to everyone apparently is against the rules maybe I should say goodbye?” Shatner tweeted shortly after getting banned Monday. Although his account was quickly restored, the experience isn’t ideal for a new user.