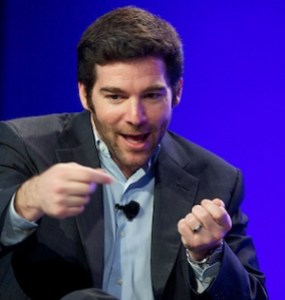 As Google+ grows at an incredible rate, it’s going to start crowding other social networks.

LinkedIn CEO Jeff Weiner warned that the new service has altered the social landscape and that users don’t have much time left for additional social networking. Something will have to go.

LinkedIn was one of the first major tech players to go public this year and its share price on the New York Stock Exchange sits above $100 per share after an initial offering of $45 a share. Now that the company is public, how it characterizes other companies in the same space will be worth noting.

Weiner briefly issued his thoughts on the state of social networking and Google+ when he sat down for a fireside chat with superstar agent Ari Emanuel and AllThingsD’s Kara Swisher, at an event organized by the Churchill Club.

Looking at the broad social landscape, Weiner said LinkedIn was for professionals, Facebook for family and friends, and Twitter for broadcasting short thoughts and information. He noted that these three networks coexisting made for an “understandable landscape,” but when Google+ gets added to the mix, people have less time and will have to start making choices about where to spend that time.

“All of a sudden, you say ‘Where am I going to spend that next minute or hour of my discretionary time?’ and at some point, you don’t have any more time to make choices,” Weiner said.

Later in the talk, Weiner said Google+ could follow Twitter in attracting celebrities and other well-known figures to help it become a more competitive service.

“[With Google+,] you see the power of Google as a platform and then you see how the power of machine learning and algorithms become very human and social,” Weiner said.

At this point, we have no idea if Google+ intends to start grasping for the professional territory that LinkedIn already occupies. But at the very least, we can see how companies like LinkedIn evolve and develop in the face of a new potential competitor. Surely Weiner already knows that Google likes to have a service for everything and will be constantly watching to see how it grows and changes as more users seek it out.