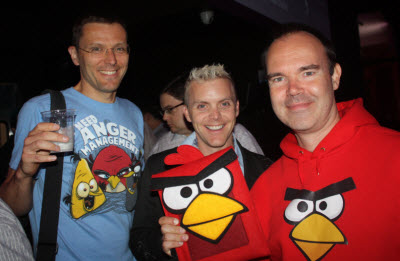 The Angry Birds game is one of the three most-pirated brands in China, behind Disney and Hello Kitty. But Angry Birds maker Rovio is charging into the Chinese market with a multi-product strategy in order to capitalize on its brand awareness.

Peter Vesterbacka (pictured, right), the head of Helsinki-based Rovio, said the company is heading into the Chinese market in its quest to get more than a billion fans for its global entertainment brand, which is based on the funny bird characters from the Angry Birds iPhone game that launched in December 2009.

Two things could happen from this strategy: people could either get sick of Angry Birds, or it could become a permanent part of pop culture.

Angry Birds has grown past 100 million monthly active users, and it has done so faster than any other technology brand in history, according to data collected by Rovio.

As for the piracy in China, “you can’t really fight that except by making better products than the copies,” Vesterbacka said. “Instead of sending lawyers, we are building products.”

The strategy is different from the usual game maker plan. Game makers typically churn out sequels, but they also move on to new games and new brands. But Rovio made 51 games before Angry Birds and Vesterbacka said it knows how hard it is to come up with something as big as Angry Birds.

“Game makers buy into their own bullshit,” Vesterbacka said. “You think you can make hit after hit. We know how hard it is to do that, so we are betting everything on Angry Birds.”

In China, Rovio is launching Chinese versions of its game on various devices and is even opening a flagship store to sell Angry Birds merchandise. The company has opened an office in Shanghai and is designing its own products there.

And it is building “Angry Birds magic” into its plush toys, which means it is adding unique features that will make its toys better than the copycats. It’s part of a wide strategy aimed at exploiting Angry Birds, which has been downloaded more than 250 million times and is played for 200 million minutes a day.

The company is launching a book in August is called “Bad Piggies Secret Egg Recipes,” a cookbook about ways to prepare eggs. There will be paper and eBook versions as well, and Vesterbacka hinted it would be on the Amazon Kindle.

The game will likely launched on the PlayStation 3 and Xbox 360 consoles this year. The company is launching a version of Angry Birds that is preinstalled on Roku TV-watching set-top boxes and a number of brand new smartphones from Nokia. And Rovio hired the former chairman of Marvel to head its new animation studio and contemplate making an Angry Birds movie. The company has grown from 12 people last year to more than 130 now. They are working on things such as Angry Birds toys.

“Our goal is to design our own products and keep control of them,” Vesterbacka said.

On the high-tech side, Rovio is embracing near-field communications, a short-range wireless technology that lets you engage in transactions. You can use your NFC-equipped phone to unlock digital merchandise at Barnes & Noble stores or unlock characters on your friends’ phones.

The goal is to turn Angry Birds into a long-term brand like Mickey Mouse or Mario. New games are in the works that will exploit the Angry Birds characters, just like Nintendo uses Mario in racing games such as Mario Kart or space games like Super Mario Galaxy. Vesterbacka said “all of our enterprises have to be insanely profitable and so far they are. The games and toys are very profitable right now.” But he added, “It’s not all about monetization now. It’s about keeping the fans coming back and building the brand.”

Asked if Rovio wants to become the next Pixar, Vesterbacka said, “We’re not so full of ourselves as to think that yet. Pixar is as good as it gets.”