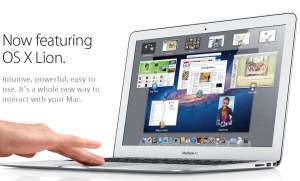 After months of rumors, Apple on Wednesday updated the super-slim MacBook Air laptop with the new Lion OS, Intel Sandy Bridge processor options and a Thunderbolt high-speed data port. It also returns the backlit keyboard that was perplexedly not included on the 2010 version.

Apple’s MacBook Air first saw the light of day in January 2008 and was one of the first big-budget laptops to take the leap of removing a CD drive, instead relying on the Web for all of its downloads. The move predicted the era of streaming content and software downloads through the Mac App Store.

Apple has typically refreshed the Air once each year to make the device smaller and faster. This refresh comes sooner than expected because the last Air version came out in October 2010. The missing backlit keyboard was likely a large complaint on that model, and the new Sandy Bridge processors offer a significant performance boost over the previous Core 2 Duo processors.

The latest MacBook Air runs the new Lion OS X, which adds more than 250 new features. The Sandy Bridge processor options, including Core i5 and Core i7 processors, will give the MacBook Air models more power than ever before.

On a related note, Apple has also refreshed the less-demanded-but-still-useful Mac mini PC. The new Mac mini has Sandy Bridge processor options and gets a high-speed Thunderbolt port. However, the DVD drive has been removed from the entire Mac mini line.

The Mac mini comes in two standard configurations. For $599, you get a 2.3-GHz Core i5 CPU. $799 gets you a 2.5-GHz Core i5 chip with AMD Radeon HD 6630M graphics. The removal of the DVD port means you’ll only be able to stream content rather than play it natively.

Will you pick up a new MacBook Air? Or perhaps you’ve got your eye on the new Mac mini?