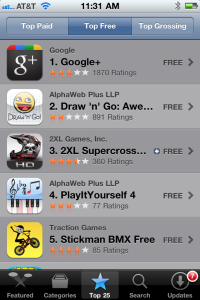 The top free app in iTunes today is Google+ for iPhone. Not bad considering the app has only been up for 24 hours and the Google+ social network is still invitation-only with 18 million users.

Compare that with Facebook’s mobile app, which is currently the 15th most popular free app — and that social network has 750 million users.

There’s been some speculation that Google+ isn’t going after Facebook and that, instead, Google+ could be targeting Twitter. Twitter’s mobile app is number 37 today in the iTunes free app chart. There are dozens of other apps to help users tweet on the go, so that could account for its lower ranking.

We played around with the app in a hands-on post yesterday. It crashed a couple times, but Google quickly released a less buggy version.

Overall, we give Google+ for iPhone two snaps and a thumbs up. The news feed is a hybrid of Twitter and Facebook, uploading pictures is a cinch and it offers Huddles, a group chat feature built into Google+.

An Android version of the Google+ mobile app launched the same day Google+ itself was launched.

Google closed invitations for its social networking site due to “insane demand” a day after it launched. The company finally opened up invitations again earlier this month.

Invitations are apparently being extended to your favorite celebrities. Google is working to expand Google+ popularity with verified celebrity accounts.