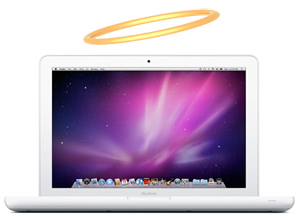 When Apple refreshed its line of MacBook Airs and Mac minis today, the company also quietly removed its $999 13-inch white MacBook from its store. Now the least expensive MacBook that Apple offers is the updated $999 11.6-inch MacBook Air.

Unfortunately, the two items are not as alike as you might think. Not only do you get less screen real estate with the Air, you also get a lot less hard drive space with only 64GB on the $999 Air’s SSD drive. But the Air makes up for this with more powerful performance, a backlit keyboard, and a lighter design with an aluminum chassis. Since the products have different audiences in mind and fulfill different needs, it seems a little curious that Apple would shutter the white MacBook.

But Michael Gartenberg, technology analyst for Gartner, isn’t surprised. He thinks the strategy is to reduce the number of products Apple has in its lineup while still offering a laptop for less than $1000.

“Given the appeal of the new MacBook Air, with better specs and a much more appealing design, I’m not surprised that Apple decided to retire the MacBook as an entry-level machine,” Gartenberg told VentureBeat. “Ever since the new Airs were introduced at the same price point, it was likely many consumers were choosing the Air over the MacBook.”

I’d venture another reason: the iPad. Apple’s staggering third quarter iPad sales indicate that many consumers are willing to sacrifice some of the better aspects of a laptop for the ease and accessibility of a tablet. I even know a few casual users who use their iPads entirely as a primary device.

Now that Apple has the iPad available at a base price of $499 and the MacBook Air available at a base $999 price, the company surprisingly has most of its consumer bases covered, and people can spend a little more if they want to upgrade from that level. And let’s not forget that Apple could easily release more products this year or next to continue hitting each level of consumer.

What do you think of Apple’s decision to kill off the white MacBook? Are you interested in the $999 MacBook Air?