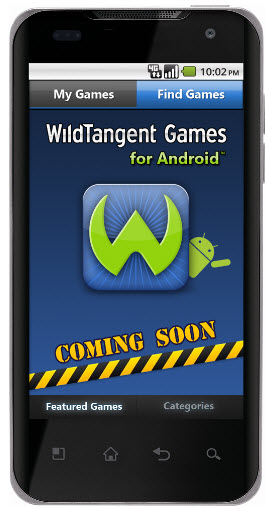 Online game service WildTangent has rounded up a trio of game publishers to provide titles for its upcoming Android games launch, the company announced today.

Its upcoming Android games service will include titles from Glu, GameHouse and Halfbrick, the Redmond, Wash.-based company said.

WildTangent has long offered web-based games on the PC, with more than 175 million monthly users. But the entry into Android games will test the company’s ability to shift into one of the hottest mobile markets. Android is gaining considerable momentum, despite Apple’s early head start in mobile.

“We’re going to bring together some of the best games and help developers make more money from them with a curated service,” said Matt Shea, executive vice president of product development at WildTangent, said in an interview.

Shea wouldn’t say exactly how many games would launch with the service, but he said that it won’t be as many as Amazon’s 13,000-strong Android app store. Rather, WildTangent will pick something like 75 to 100 titles. Consumers will be able to play the premium versions of WildTangent’s Android games for free if they’re willing to view ads, or they can rent them for a fraction of the retail price. They can also purchase any titles they want to own through the service. Any rental fees apply toward subsequent purchases.

Sean Vanderdasson, senior vice president at WildTangent, said in a statement,  “Consumers can finally play every quality game that interests them, without the limiting requirement to purchase the game first; and developers will finally earn real revenues from their titles from premium advertising, rental, and purchase options.”

Sandy Green, director of sales at GameHouse, said the deal means that more fans can try games before they buy them. Adam Flanders, general manager of North America at Glu, said that Glu will offer a few titles to WildTangent.