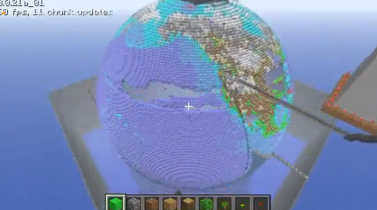 Apple’s latest operating system does not include Java, which is required to play the game. When I tried to open the game (for research purposes only), I had to download Java for OS X 10.7 to run it. Minecraft is a darling in the indie gaming community, with more than 10 million users. The Mac is already light on games, with Minecraft being one of the platform’s stronger independent titles. That could indicate Apple really isn’t communicating clearly with independent developers about changes — like the ones behind Minecraft.

In Minecraft, players wake up on a deserted island and start punching trees. That creates wood, which they can turn into mining picks and other types of tools. From there, the sky is the limit. Players can chip away at anything in the world and use it as a resource to build whatever they can think up. They can craft specific items, like swords and tools, or simply use blocks to build up giant and complicated structures.

Projects range from a scale representation of the  U.S.S. Enterprise featured in the Star Trek series to a giant cannon powered by 73 blocks of TNT with the sole purpose of launching a cow to the moon in a mining cart. Players have even taken a few shots at using Minecraft to create artistic videos that have become pretty popular on video-sharing sites like YouTube.

Instead of using a publisher, game creator Markus Persson relied on viral communities to spread word about the game. It spawned a number of online communities, such as one on Reddit. The game even has its own Wiki, because of just how many things players can do in the world. But Persson said he doesn’t have any plans to go the entrepreneurial route like Mark Pincus once took when founding Zynga.

The game exploded in popularity because its building mechanics make it easy to create incredibly complex objects, and the game’s “Redstone” material generates an electric current. Players have built some crazy things within the Minecraft world, from a completely operational computer to a scale representation of the earth.

Successes like Minecraft are hard to come by and usually take a little bit of luck and some counter-intuitive strategy — like releasing a half-finished game and letting a community play-test it, Persson said in a question-and-answer session on news aggregator Reddit. Zynga took a similar approach in order to quickly release several games and promote them. Minecraft’s success sets a lot of standards that other independent developers are now aspiring to. So it’s likely we’ll see more games open up their code for custom modifications as Minecraft has done.