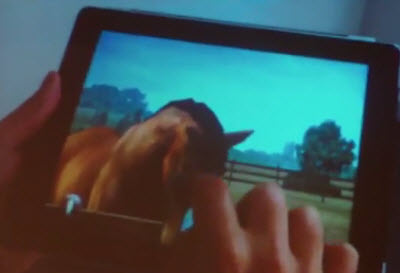 Game developer NaturalMotion showed off a cool, super-realistic horse simulation game on the iPad this week that wowed attendees at the Casual Connect game conference in Seattle.

The demo proves it’s is one of the most technologically adept developers in the video game business.

While it took really spectacular technology to create the realistic horse simulation, the game itself was really simple. And that showed that NaturalMotion has learned from some of the mistakes of its past, when it tackled projects that were too difficult to pull off.

If NaturalMotion succeeds with its new strategy of targeting a wide audience on the iPad, it could create one of the best-looking games on Apple’s tablet and win over new fans such as young girls, an often-ignored market in the video game business.

In the demo, NaturalMotion chief executive Torsten Reil showed how you could play with a beautifully animated, realistic-looking horse. You could pet it, wash it, feed it and otherwise learn about how to ride and train a horse. That’s pretty standard in horse-training games, but the graphics and physics were a cut above most other games on the iPad. The game is called Stable Friends and it is being developed by external developer MunkyFun in San Francisco. The free-to-play game is planned for the third quarter on Apple’s iOS (iPod Touch, iPad and iPhone).

“That’s our vision of where high-end and mainstream games are going,” Reil said in a keynote speech at the event. “We are trying to marry really high-end production values with really accessible game play. We can create something that people can connect to emotionally and [that] drives revenues. It’s an incredibly exciting time in the business.”

Oxford, England-based NaturalMotion was founded in 2001 and initially created game development tools such as Euphoria and Morpheme to enable game developers to build realistic characters that look and move like real people. The tools have built-in physics so that motions look accurate and interaction with the characters seemed flawless. Many game makers have licensed the technology.

But NaturalMotion made a mistake when it tried to take on the giant of the sports game business, Electronic Arts, and its flagship title Madden NFL Football. NaturalMotion made a console game called Backbreaker Football, which featured brutally realistic football tackles. The concept was good. But when it debuted, the game was full of bugs and was panned by the critics during the summer of 2010. NaturalMotion released a bug fix that cleared up many of the problems, but the game never recovered.

Reil told us last fall that the company has since pivoted into the iPhone and iPad game business to get its second life in digital games. Using an outside developer, the company released a 99 cent version of its Backbreaker game on the iPhone earlier this year and got millions of downloads. It then created a new studio, NaturalMotion Games, to develop iPhone games and launched games on the AppStore such as Backbreaker 2: Vengeance, a sequel to the football title; and Jenga, based on the board game. Both feature cool physics simulations for the first time on a handheld device. Reil said in his speech that the new games are getting a five-fold return on investment.

NaturalMotion can distinguish its games with superior graphics and physics. The technology makes a game seem more realistic because the behavior of objects and characters aren’t repetitive. They move according to the laws of physics, so they never make the same kind of motion in exactly the same way.

Reil said the technology works well for horses, which are easier to animate than humans (who often look fake in games when they move or talk). The technology can make each horse behave uniquely, which means that the player will come to view the horse as his or her very own animal — a unique creation.

“We’re using technology to create something you can emotionally connect to,” Reil said.

Reil didn’t say when the new game will come out. It has different chores for the player to perform in order to earn rewards, and it also has virtual items such as saddles and brushes that players can purchase with real money. You can also show off your horse in riding competitions and buy items that help your horse jump higher and perform better in tournaments. In other words, NaturalMotion has figured out how to make this technologically cool game into a commercially viable product.

The superior computing capability of the iPhone and the iPad — as well as devices that are coming in the future — mean the company can take spectacular console technology and make it work on the tablets. It is smart of the company to target the game toward girls, who are proving to be big users of iPads, which are more appealing to the mass market than the hardcore game consoles that are aimed at young men.

Rivals include other mobile game makers such as Ngmoco, Gameloft, Epic Games’ Chair Entertainment, EA Mobile (a division of Electronic Arts), and Glu Mobile. Investors in the parent company include Balderton Capital. Licensees for the physic technology include Ubisoft, Take-Two Interactive, THQ, Activision Blizzard, Disney, BioWare and CCP. Money from the licensees has made NaturalMotion profitable.

Here’s a video of the horse game. It looks grainy since I shot the video from a long way away as it was playing on a big screen.