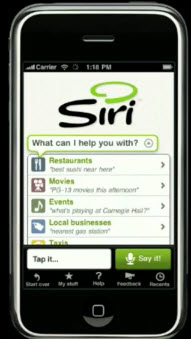 But Apple shelved the technology and fans have had to wait for a long time to find out what Apple will do with it. The 9to5 Mac blog now says it believes the Siri technology will be reborn in the upcoming iPhone 5 under the name “Assistant.” If this speculation is true, then Apple could have a very cool discovery technology that will help users find what they want more easily and quickly. And that should set Apple’s phones apart from its rivals yet again.

9to5 Mac said it obtained a screen shot that showed a test screen for a new iOS feature. The source of the information warned that the technology was still in development and might not be done in time for the iPhone 5.

Siri was developed by SRI, which has worked for years on virtual assistant technology. Dror Oren, who directs tech licensing at SRI International, said at our GamesBeat 2011 conference last week that SRI — a research institute spun off a long time ago from Stanford University — has a lot of other AI technology that should be able to solve the problem of discovery — where there are so many apps that users won’t be able to find the ones they really want.

Based on information from an unnamed source, the blog said Apple plans to integrate the Siri technology into the fall release of iOS 5, which is expected to be the version of the operating system that will run on the iPhone 5.

Siri takes advantage of another technology, Nuance’s speech-to-text voice recognition system. You can make a request by asking for a “nice Italian restaurant” and Siri will come back with recommendations. You can then ask Siri to book a particular restaurant at a certain time and it will do so.

Assistant will reportedly use information from a user’s device such as location, contact info, and music metadata to formulate a profile of the user that will help the AI technology make the best guess about what the user wants. The AI will improve its results over time as it learns more about what the user likes. If it works, then Apple will have some pretty cool sci-fi-like technology to show off once again.

See a video of Siri below.