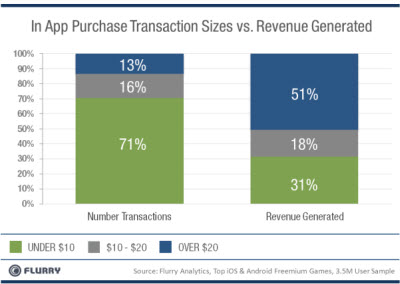 Not everyone buys virtual goods in mobile games. But among those who do, the average purchase price is pretty big: $14.

That’s a pretty big number, considering free-to-play games are relatively new to consumers, according to stats gathered by mobile analytics firm Flurry. Not everyone is used to buying items inside games. But the number shows that people who make in-app purchases (the name for goods purchased while an app is still running) are willing to spend much more on a game than they would if they simply downloaded it for 99 cents.

“We were surprised the numbers were so high,” said Peter Farago, vice president of marketing at Flurry. “Clearly, the high end of the spending drives the average up.”

Apple first introduced in-app purchases for the iPhone in the fall of 2009. In such titles, the game is available as a free download, but users pay real money for virtual goods inside the game. Earlier this month, Flurry said that games drive 75 percent of the revenue among the top 100 grossing iOS apps, and 65 percent of the game revenue came from free-to-play games.

Flurry’s latest findings are based on data from 3.5 million consumers. About 71 percent of the transactions were for $10 or under. About 16 percent were for $10 to $20, as you can see in the chart. In the under-$10 category, most of the transactions were at the $9.99 level, followed by $4.99 and then 99 cents. Consumers spent 99 cents less than 2 percent of the time. Flurry notes that the biggest decision a consumer makes is about whether to make a purchase at all. Once the consumer is committed to the game, they are willing to pay large amounts for items in the game. Also, the high end of the spending is very high — 5 percent of all purchases are for amounts greater than $50. Gamers who spend a lot on in-game purchases are known as “whales” and Flurry recommends game creators design their games to accommodate the whales.

“Once someone becomes a spender, they don’t mind spending larger numbers,” Farago said.

By the end of 2011, Flurry believes that total U.S. iOS and Android game revenue will top $1 billion. Portable gaming is a multibillion-dollar industry, but it will feel the impact of that.