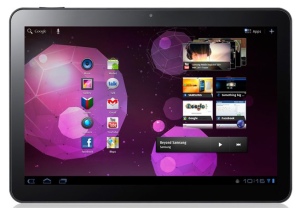 Verizon Wireless on Tuesday added a little bit of 4G magic to its Android tablet lineup with the 4G LTE Samsung Galaxy Tab 10.1.

Verizon has shown off its impressive reach by expanding its blazing fast 4G LTE network at an impressive clip since its introduction in Dec. 2010. The 4G network now serves more than 70 metropolitan areas.

Sarah Rotman Epps, senior analyst for Forrester Research, said that while Samsung is moving in the right direction with tablets, Forrester is still forecasting Apple’s iPad to get 80% of tablet sales in the U.S. in 2011.

“Samsung has aggressively innovated to improve the Galaxy Tab product and marketing strategy,” Epps told VentureBeat. “Samsung is moving in the right direction, but Apple is leagues ahead.”

Are you a fan of the newest Android tablets? Are you thinking about picking up a Galaxy Tab?