Smartphone sales are still on track to skyrocket during the next few years and will exceed one billion devices by 2016, IMS Research said in a new report out today.

“The trend is mostly enabled by an increase in entry-level smartphones, which give more users access,” Josh Builta, mobile analyst for IMS Research, told VentureBeat. “Like with many other products, affordability along with high demand equals big sales.”

A prime example that Builta cited for falling smartphone prices is AT&T’s $50 iPhone 3GS. And over time, older-but-still-powerful phones will eventually be offered for free with contracts, at least in the U.S.

“It’s possible Apple could bring out a lower-cost iPhone model to market too,” Builta said. “That would help Apple maintain its momentum.”

For 2011, the report says more than 420 million smartphones will be sold worldwide. Nokia is still the world leader in smartphone sales, but its decline is happening quickly thanks to demand from Apple’s iPhone and manufacturers of Google Android phones. 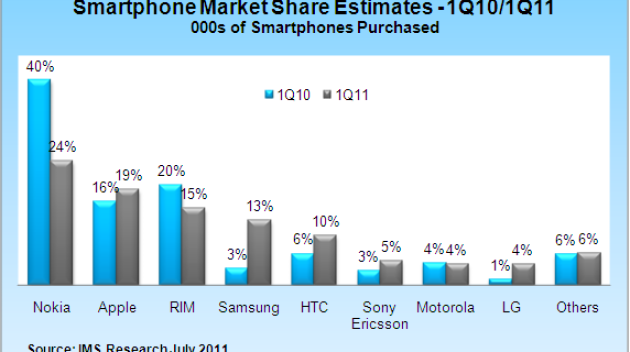 These trends will likely continue, especially for Nokia, which is undergoing a dramatic company changeover from Symbian to Windows Phone 7 devices. Apple and Samsung are currently fighting it out to see which company will surpass Nokia in worldwide smartphone sales in the second quarter of 2011.

Builta said strong smartphone sales are sustainable for the foreseeable future. Right now, the North American and European markets have the most smartphone penetration, but those sales will likely level out in the next few years. But as those sales level, high-population countries like China and India will start seeing larger penetration and pick up the slack to push worldwide sales even higher.

“Higher smartphone demand is being driven by factors like a wider range of applications and social networking,” Builta said. “And who knows what else is around the corner?”