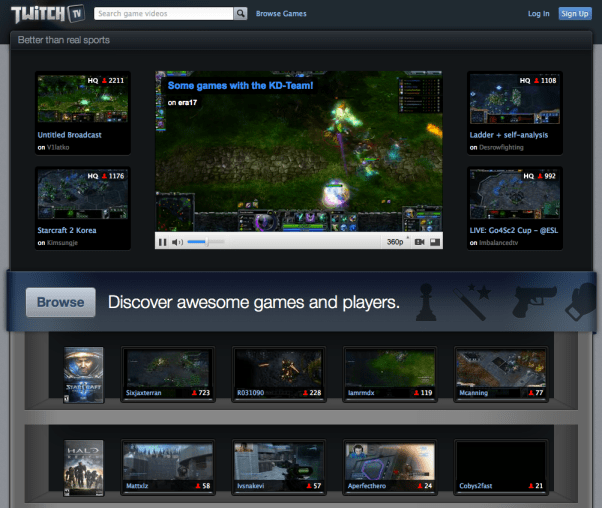 Video streaming site Justin.tv announced today it’s launching a revenue-sharing program that professional gamers with a large number of followers can enroll in through the company’s competitive-gaming site.

The best of the best in competitive video-game leagues — called e-sports leagues — already have thousands (if not tens of thousands) of followers. The new program gives those competitive gamers that have generated a large number of followers the same chance to make money off their streams the same way popular YouTube authors can make money with their videos.

Now Twitch.tv users who have at least 500 concurrent people on average watching their streams, 1,000 followers and at least 300,000 total views on their channels are eligible for revenue sharing. Those aren’t hard and fast rules — for example, a user with fewer than 1,000 followers but a much higher number of channel views would still be eligible.

The company ran a beta version of the program for around six months before deciding to launch it today. It included the likes of well-known competitive Starcraft player and commentator Day(9), but the company was pretty quiet about the program until now.

“We’re going to be a little more liberal now that it’s actually launched,” said Justin.tv chief technology officer Emmett Shear. “We use algorithms to bring people to our attention for the program, but it’s individually curated.”

Justin.tv launched Twitch.tv, a video streaming site branded for e-sports, at the Electronic Entertainment Expo video game trade show in early June. Since then, the site has picked up around 3.2 million monthly active users, with each user watching a stream for around 4.5 hours on average each month. Channels on the site have picked up more than 45 million pageviews.

Electronic sports leagues, or e-sports, are already popular internationally — particularly in countries like South Korea, where players compete for tens of thousands of dollars in prize money in massive tournaments. The league has only grown slowly in the United States because it hasn’t achieved the same level of visibility that professional gaming has internationally. But a number of companies, like Justin.tv and game developers, are doing their part to bring more attention to professional gaming.

For example, Activision-Blizzard, the developer of Starcraft II: Wings of Liberty, cut a large chunk of content from that game and made it less graphically demanding to ensure that it would be a better vehicle for professional gamers. The company regularly holds massive tournaments at its annual conference in Anaheim, Calif. There is also a professional gaming league site called Major League Gaming that features clips from professional gaming matches and a forum where gamers can meet and schedule matches.

Justin.tv started transitioning its e-sports broadcasters over to Twitch.tv by automatically moving them to the other site and letting them opt out of the move starting today. Justin.tv users that broadcast gaming channels started receiving emails last night about the transition, Shear said. So far, nobody has complained about the move or even opted out of the move yet, he said.