Show Them the Money

Common wisdom says if you want big money — big, multi-million dollar VC deals in particular — you have to head north to Silicon Valley. Yet some, both within and outside in the L.A. scene, are saying more Bay Area VCs are looking south for their next big deal.

“In the last three years,” says Craig, “I’ve seen almost every one of those folks coming down and investing in LA companies. VCs and angels love coming to LA, and the smart ones find killer companies to invest in.”

And for those who prefer to take small amounts of angel funding to get off the ground, as many L.A. startups have, the community is practically glittering with angel investors, “hundreds” according to Craig’s estimation. The city is one of the top three locations on AngelList, a close-knit, high-impact community of investors and startups.

While L.A. investments have followed nationwide trends since the recession, there are a few bright spots, mostly around the web sector. “SoCal investments haven’t been as large as they used to be about 3-plus years ago,” says a representative of Dow Jones VentureSource, which compiles data on venture capital investments. “Looking at the first half of 2009, 2010 and 2011, deal counts have risen slightly each year. Capital invested has seen some ups and downs, but a few big investments one year can easily inflate this number.”

In fact, looking at the number of deals inked in SoCal alone, those digits have already risen beyond pre-recession levels for the consumer information services sector, which includes social media web apps and online entertainment properties, as seen in the graph below. 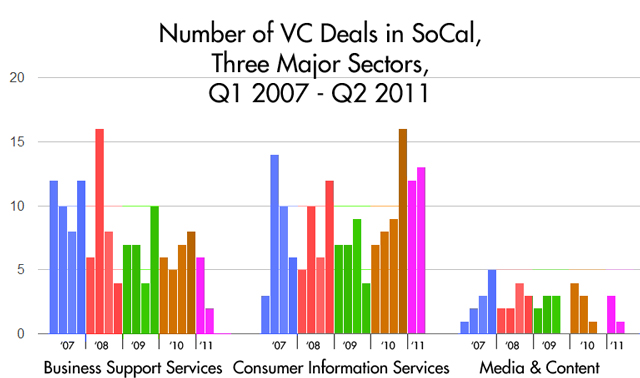 The spokesperson also notes that whereas national VC activity is seeing its strongest growth in the IT and healthcare sectors, Los Angeles’ biggest areas of growth have been consumer-facing web apps, media companies, and web-based marketing tools.

“Southern California’s consumer web and media companies are heavily concentrated in L.A., which make sense, given the primary industry that area it’s known for. L.A.-based companies also make up a large proportion of the business support services companies getting funding. This sector is largely driven by investments in online advertising and marketing companies.”