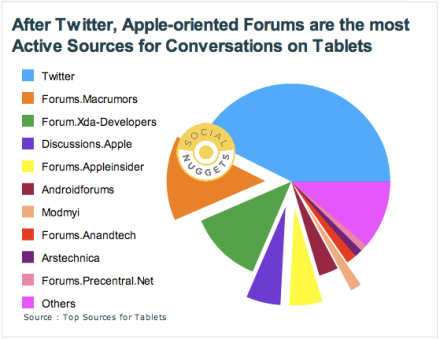 Social analytics company SocialNuggets is releasing its first free analytics portal Wednesday. The site provides free data analysis for the tablet industry, based on millions of tweets, blog posts and other online content.

Other portals focused on different industry verticals will follow.

Processing and making sense of this kind of data can take a lot of manpower. SocialNuggets addresses that with its language-processing and text-analytics engines, which its customers can employ for decision making.

The tablet portal showcases data on the tablet industry, intended to help consumers and companies alike plan and buy. To find tablet data, SocialNuggets scoured upwards of one million conversations occurring on blogs, forums, social media, etc. over a six-month period. From there, it measured sentiments, counted the number of conversations, and more. Here are a few “nuggets” SocialNuggets uncovered:

More verticals are to come. “Every month you will see brand new data that will be put on the public portal,” said Singh.

Sentiment analysis is particularly important for analysis portals. Singh, who is confident in his sentiment engines, 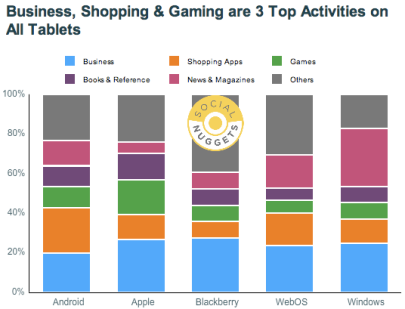 used the example of “long battery life” versus “long charge time.” The phrases are very similar, but one is positive and one negative. Sentiment engines like those used by SocialNuggets are designed by humans to evaluate words in context, ultimately reflecting in more accurate data analysis. Additionally, SocialNuggets uses charts to display data in the portal. Both of these require some human input by SocialNuggets staff — they’re not completely automated.

“It’s not as much manpower as it might appear,” he explained. “When we train a market the first time, it takes about 2 weeks. Once that is done, then that person isn’t working on that market except for periodic checks.”

As far as charts go, the portal does produce standard graphs in iChart, with a little human work behind the scenes for beautification.

In order to monetize its free analysis, SocialNuggets makes money from its premium data portals, which provide company-specific data for a fee. SocialNuggets most recently signed the Consumer Electronics Association as a customer this past June.

Competitors like Radian6 and ViralHeat perform similar functions, but provide a “firehose of data,” according to Singh and don’t provide enough accurate analysis, he says. ViralHeat recently announced a Human Intent program.