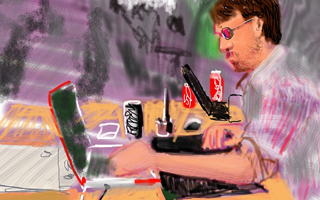 If you thought Startup Weekend was a hackathon, you’d be about half right. According to a recent report, the event’s focus has shifted from executing clever tech tricks to solving problems in a community. It’s an exercise in practical entrepreneurship rather than pure coding.

The nonprofit’s annual report, released last week, shows huge growth for the still-young organization. Nearly 36,000 people have attended a Startup Weekend even, and 43 companies say they got their start there. But what’s more exciting than the stats is the future.

In the months and years to come, the Startup Weekend team hope to bring their tried-and-true formula for overnight entrepreneurship into new territory, including health, developing areas, education, government, arts and the environment.

“People want to do these events to solve real problems,” Startup Weekend CMO Joey Pomerenke told VentureBeat. And he said that not all of the solutions need hard technology. While developers made up around 39% of all Startup Weekend attendees, 25% of participants identified as businesspeople, and 10% said they had a focus on user experience.

The event was founded in 2007 by Andrew Hyde in the startup hotbed of Boulder, CO. Like other hackathons, such as the Change.org hackathon, the Rails Rumble and the Django Dash, early Startup Weekend events were developer-heavy and focused on building mobile and web apps for the tech-obsessed. In 2009, Hyde turned the keys over to Marc Nager and Clint Nelson, who turned the event into a nonprofit, secured a grant from the Kauffman Foundation, and expanded the event to multiple cities. It’s now one of the biggest developer/entrepreneur events and the only one with a broad, entrepreneurial focus — it’s as much about building teams and creating a community of entrepreneurs.

“It’s evolved into something bigger than we ever thought it would be,” said Pomerenke. “It’s turned into more of a global movement to inspire and educate entrepreneurs; it’s not just a hackathon anymore.”

In fact, Pomerenke mentioned that not every great idea necessarily needs a great developer to execute it. “In Borneo, the winning idea was a better way to farm chilies. It’s a real problem they have there, and the team had a great way of solving it… There’s a lack of developers in a lot of regions, but there are still great ideas, and a lot of them aren’t necessarily technology-related. But they do solve real-world problems.”

In addition to its expansion beyond its traditional techie roots, Startup Weekend is also coming to universities and colleges. As Pomerenke said, “We want to get this model into schools: Who needs a business plan? Just take an idea and build it!”

While job creation is “not our number-one metric,” Pomerenke did say the events have an overall net positive effect on the economy.

“We’re a nonprofit, and our focus is on building a healthier startup community in cities around the world. And it just so happens that there are legit companies coming from Starup Weekend that are creating full-time jobs, so we’re starting to track that.”

Around three quarters of Startup Weekend attendees reported that they planned to continue working on their SW projects once the weekend had ended. Among the 43 companies that self-reported, the founders said that 130 full-time and 90 part-time jobs were created and that an additional 92 full-time and 71 part-time jobs would be created within six months.

Pomerenke said, “We do a lot of promotion [to women]. We work with Women 2.0 really closely. We just did an informal partnership with Astia. And we always get way more women attendees when we do those partnerships.”

Although the lack of gender parity in fields such as technology and entrepreneurship is a larger cultural problem and not one that’s solvable by a single group, Pomerenke did say the Startup Weekend staff is also asking female attendees lots of questions about their choice to attend and their experiences. “That’s something we focus on: How do we get more women to participate? We’re trying to figure out why more women aren’t going to events like these in the first place.”