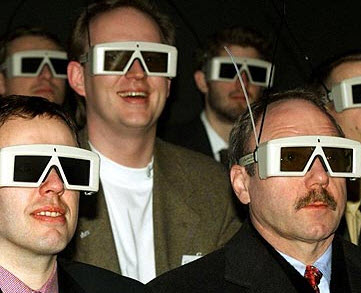 TV and monitor makers would love to sell more 3D displays. But Electronic Arts isn’t going to help them.

At EA’s annual meeting today, a shareholder asked John Riccitiello, chief executive of EA, what he thought about stereoscopic 3D games, where you can use special glasses or just your own eyes to see images in three dimensions on TV sets. The question is apt since there’s a huge ecosystem of display makers who are looking to 3D as a way to charge more for their products. But consumers aren’t coming out in droves for it.

Riccitiello noted that all of EA’s games are built in 3D and the company doesn’t need to make a fundamental shift in production technology to do 3D, in contrast to the TV industry. He acknowledged that 3D can make for a better entertainment experience. But consumers aren’t yet willing to dish out a lot of money for it.

He noted that Nintendo launched its 3DS handheld with glasses-free stereoscopic 3D and it was heralded as “the next big thing.” But there have been complaints of 3D causing headaches and nausea. And it hasn’t sold as well as Nintendo liked, Riccitiello said. In fact, Nintendo cut $80 off the $249 3DS last night.

EA isn’t interested in investing in the 3D game market as a result and it is instead putting its money into mobile, social and online game opportunities.

“We see really high returns in these markets and very poor returns focusing on 3D, so we are allocating our resources toward new innovations,” he said.