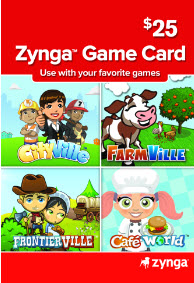 Zynga plans on taking over the world with social games. But it’s not so easy in places where there aren’t easy payment mechanisms such as credit cards. So the company is teaming up with Gate2Play to launch prepaid Zynga Game Cards which can be purchased in stores and redeemed to buy digital goods in Zynga’s online games.

Amman, Jordan-based Gate2Play will distribute the prepaid cards at thousands of stores in 16 countries in the Middle East and North Africa. It will also make the cards available for purchase through electronic means known as virtual e-PINs. The cards are a good way to expand social games — and ways to pay for them — to places where reach is currently minimal. It’s a coup for Gate2Play, since Zynga is the world’s largest social game company with more than 262 million monthly active users on Facebook.

The cards are availabe in values of $2, $5 and $10, giving players plenty of flexibility to make small purchases that fit their needs. Muhannad Ebwini, chief executive of Gate2Play, said that very few online users in the region use credit cards. Most prefer alternate payment methods such as pre-paid cards, bank transfers, and mobile text-message payments.

“The pace at which the Middle East’s social gaming market is growing represents a significant opportunity for both Gate2Play and Zynga,” Ebwini said.

The cards will be available in Algeria, Bahrain, Egypt, Iraq, Jordan, Kuwait, Lebanon, Mauritania, Morocco, Oman, Palestine, Qatar, Saudi Arabia, Tunisia, the UAE, and Yemen. Gate2Play was founded in 2010 and it has eight employees. Gate2Play has raised $500,000 from the IV Holdings and the ATH Group.