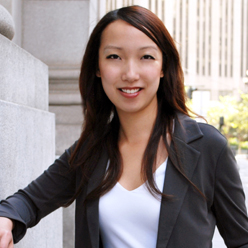 Hearsay Social exists to keep corporations and their employees out of trouble on the internet and turn social media into a source of brand engagement, not embarrassment.

Hearsay Social is the brainchild of Clara Shih, known for her New York Times bestselling book about using Facebook as a marketing platform, The Facebook Era. The company has created tools to let corporations monitor what their employees do on Facebook and Twitter and then train those employees to send out brand messages at a local level.

That human touch on a local level can get customers more engaged with a product, Shih told VentureBeat.

Roughly 65 percent of Fortune Global 100 companies have invested in a Twitter presence, and 54 percent have a presence on Facebook, according to Burston-Marsteller Communications. And 73.5 percent of chief marketing officers cite social media as a top business priority. Hearsay Social essentially shows them what they can do.

Food companies can get employees to hand out coupons to people in their areas. Insurance companies can get messages out about how to save money for retirement and at the same time monitor whether employees are complying with regulations about the sale of insurance policies. Companies of all sorts can mitigate brand risks and manage corporate compliance. The tools can empower local representatives, agents, advisers, franchisees, or store managers who otherwise wouldn’t know exactly what to say on social networks.

San Francisco-based company has gained a lot of traction with clients such as State Farm Insurance, which has grown its social media workforce to more than 16,000 employees in just 16 weeks. Hearsay Social gets paid a subscription fee for every user, so it becomes more successful the more a corporation uses the product.

In her pitches to corporations, Shih said she sometimes runs into executives who say they don’t want their employees on social media.

“I tell them you already have 30,000 employees on the internet and they’re already representing you, unofficially,” she said. “The brand might be liable for anything that they say. You can change that risk into a number of digital brand representatives.”

Shih is announcing today that the new services include integrated social campaigns, regional management consoles, and rogue page finders. The latter can help companies find videos such as the infamous unauthorized Domino’s Pizza employee YouTube video, where an employee picked his nose and rubbed it into pizza dough and spit into it, too.

“This tool can help the company find a video like that before it gets 3 million views,” Shih said.

With the integrated campaign manager, companies can manage a large social media campaign, crafting Tweets, Facebook status updates, ads, and LinkedIn messages that can be tailored locally and sent out on a schedule. And the regional management console allows branch offices to nurture authentic relationships with customers on a local level. Those local efforts at social media are naturally more authentic because the employees can relate to the environment around them more easily than distant executives can.

“Nobody likes an institutional voice,” Shih said. “Employees can be empowered to speak in their own voices.”

The funding comes from New Enterprise Associates and Sequoia Capital. The large amount of venture funding shows that the company has a lot of traction. NEA partner Jon Sakoda is joining Hearsay Social’s board. The company will use the money to accelerate its growth and hire more people.

The company was started in 2009 by Shih and former Microsoft executive Steve Garrity. In 2007, Shih created the first business app on Facebook and her book has been translated into nine languages and is used as a textbook at Harvard Business School. In her research for the book, Shih was exposed to all sorts of social media strategies and corporate executives. In her interviews, she was struck at how worried companies were about rogue employees. So she started Hearsay Social to deal with that problem.

Hearsay Social has 30 employees and competes with rivals such as Socialware and Vitrue, but those companies don’t offer what Hearsay Social calls its comprehensive social media platform. And Hearsay Social, which operates as a software-as-a-service, can scale to thousands of employees.