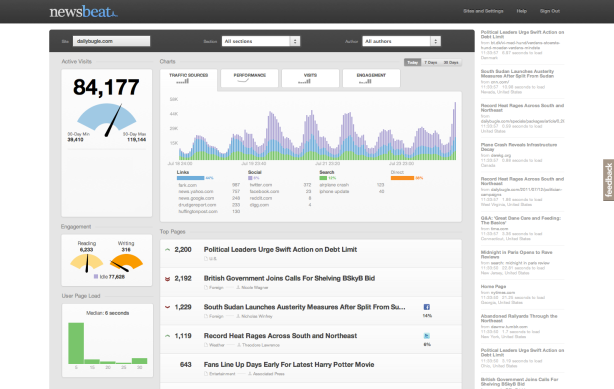 I already spend a good chunk of my time obsessively checking traffic analytics for VentureBeat through Chartbeat. It gives us a breakdown of where our readers are coming from and what stories are popular. Luckily there’s a least upper limit to my neuroticism, because Chartbeat only tracks the top stories on VentureBeat.

Not any more. The developers behind Chartbeat announced today that it is launching Newsbeat, a more in-depth traffic analytics tool geared toward news publishers that tracks data for every single story on the site. Now, instead of just obsessing about where my readers are coming from for top stories, I’ll be obsessing about — well, everything. 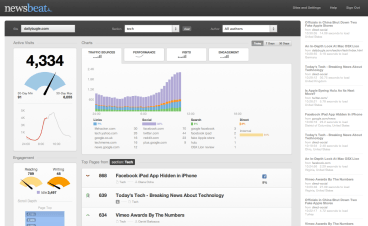 Like Chartbeat, Newsbeat breaks down individual traffic sources for a web page on a site. It gives the site owner specific information about what sites are linking to the page and how many visitors are coming from social media sites like Twitter and Facebook. The site shows the number of active readers on that specific page and ranks the pages with the most readers in a list.

“Newsbeat is really about the stuff that’s under that top curve, it’s everything on the site,” Betaworks’ Dawn Williamson told VentureBeat. “Where Chartbeat tracks the top 20 or so stories on your site, Newsbeat shows and tracks every single page on your site and feeds you analytics on it.”

But unlike Chartbeat, Newsbeat breaks down the traffic for specific sections and authors on the site. The site developer just has to tag certain parts of the site with a code that indicates that it is for a certain section — say, the MobileBeat section of VentureBeat. Newsbeat then drills down specific analytics for sections and authors. It’s designed to be more useful for publishers and editors working on specific sections, Williamson said.

“There are fewer and fewer people in newsrooms, and they’re all being asked to do more and more,” Williamson said. “We wanted to give people in the newsroom the tools to be better at their jobs and to really focus in on the stuff that matters.” 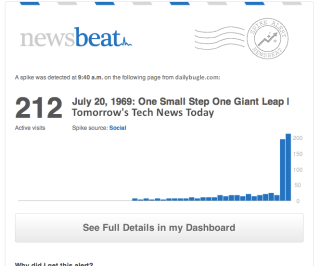 Newsbeat also scrapes analytics data from previous stories and builds a predictive model for new stories published to a new site. When a reporter posts a story, for example, Newsbeat creates a predictive model for how it expects the traffic to grow and decline for that story. If the story breaks away from that model — if, say, it lands on a popular news aggregator — Newsbeat sends a text message or email to the author (an example is shown to the right.)

Chartbeat was a smash hit with both publishers and other site owners. It has clients like Starbucks and Groupon (and as full disclosure, VentureBeat also uses Chartbeat — I check it about every two seconds to find out which stories are doing well on the site). Newsbeat has already picked up a number of notable clients in its closed beta, including Al Jazeera and the New York Times.

Stories that show up in the traffic leaderboard are marked with up and down arrows that indicate how quickly the traffic is accelerating. One arrow is typical for a new story, and stories that are “blowing up” are marked with two or three arrows. It’s designed to help publishers identify what kinds of stories are popular and shape the coverage of a topic accordingly, Williamson said. 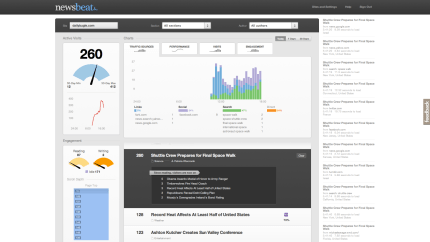 The site has been growing quickly since it launched. It raised $3 million last year and has 18 employees. That has put it in a pretty good position that it doesn’t need additional funding at this point, Chartbeat’s general manager Tony Haile told VentureBeat.

“We’re in the lucky position of having lots of customers that pay for our service,” Haile said. “We may think about a funding round some time in the future if the right partner comes along but right now we’re just focused on keeping up with the crazy growth we’re seeing.”

Betaworks is now going back to Chartbeat and figuring out what other sites — aside from publishers — are doing with the dashboard, Williamson said. The company’s goal isn’t to replicate the same features that are now in Newsbeat in Chartbeat, because that would defeat the purpose of having two clients, Williamson said. Instead, Chartbeat will be geared toward other site owners, while Newsbeat will fill a niche for publishers, she said.