It’s no secret that Google is preparing an applications platform for its Google+ social network. Game developers say they’re looking forward to making games for the platform, which could launch within a matter of weeks.

Google+ has gained tens of millions of users in the past four weeks and has become an attractive platform with a lot of potential for growth in the future. Game developers and publishers want to adapt their games to it so that they can diversify away from platforms such as Facebook and the iPhone, adding a new source of revenue. The launch of the Google+ game platform could open a big new audience for game companies and create an interesting alternative in the war for the hearts and minds of game developers. (For our analysis of the Facebook-Zynga story, see this link). 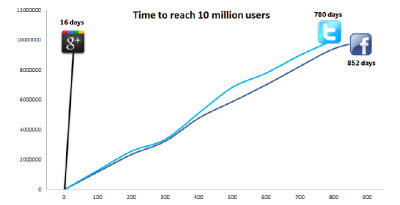 A number of developers we interviewed weren’t exactly sure of Google’s plans. But most were confident that an app platform would launch soon and that it would change the game industry when it does.

Google+ hit 10 million users in its first 16 days, growing at a faster rate than both Twitter and Facebook in their early days, as you can see in the graphic. Millions more have joined subsequently. In the second chart (both from Wedbush Securities), you can see that Google+ is growing well overseas too. The rate is fast because Google has made it very simple to join through its properties such as Gmail and search.

“If Google creates a great experience for games, it could work,” said the chief executive of one Facebook game company, who asked for anonymity because of confidential agreements. “Developers want to make money and have lots of users. If Google can deliver that, we will be there with our games.” 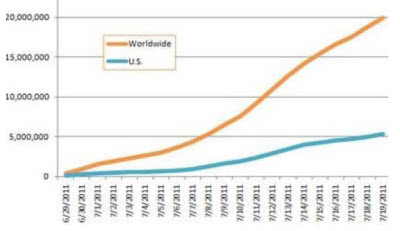 Google declined to comment extensively on this story. A couple of sources said they believe Google could launch a platform for games within a couple of weeks. And they confirmed that Google was having conversations about getting launch titles for the debut. But they also said the timing isn’t firm, perhaps because Google’s engineers are busy fixing bugs related to the launch of Google+.

Officially, a Google spokesperson would only say, “Google+ is an ongoing project and this is just the beginning. We plan to add a lot of features and functionality to Google+ over time.”

Google has repeatedly said it will open up the platform to running apps. And Google already accidentally confirmed that it will soon have games on Google+ when it temporarily posted help pages confirming the existence of an upcoming Games Stream. The page it linked to has since been removed. The Games Stream looked like a social style news stream that contains messages related to what your friends are playing on Google+. Games are played by roughly two-thirds of the population; so if Google amasses a lot of users, it will likely have a big audience for games.

Google’s relationships with game developers have been getting better thanks to the skyrocketing growth of Google’s Android mobile operating system. More than 500,000 Android phones are being activated every day, and Google has pleased game developers by fixing its in-app purchases, or the ability to buy virtual goods from within a game. That allows game companies to implement the free-to-play game business model, where users play for free but pay real money for virtual goods. With in-app purchases, the Android platform gives developers real potential to monetize on their games.

Tim Merel, managing director at game-focused investment bank Digi-Capital, said that comparing Google+ to Facebook now is a little like comparing Android as it was 18 months ago to Apple’s iOS (iPhone, iPod Touch, iPad). At that point, there was no contest, but today, Android may be winning the largest volume of the market.

“It will depend on how Google+ develops as a platform in its own right,” Merel said. “If it achieves volume and network effects comparable to Facebook, then you have your answer. If it doesn’t, likewise. The difference with the Android/iOS situation is that there are already entrenched players in all social markets globally as well as Facebook.”

Google has yet to fully communicate its strategy on games. It can’t just try to duplicate Facebook games, since Facebook still has a huge advantage in numbers of users. It is important to communicate the right strategy at the beginning and find a way to get unique games on Google+. At the Casual Connect  game conference in Seattle this week, games on Google+ were a frequent topic of conversation, but the details were pretty light.

“There is terrific potential for games on Google+,” said Billy Pidgeon, a game analyst at M2 Research. “Opening up gaming on other social networks gives other publishers more opportunity to compete outside the Zynga-Facebook matrix, and can also help Zynga escape dependence on Facebook.”

There are features on Google+ that are particularly attractive to game companies, Pidgeon said. The ability to separate your friends into “circles,” or interest groups, means that you can put your gamer groups in certain circles and then communicate with them easily. And Pidgeon believes there will be some synergy between games on Android and games on Google+ — or at least there should be.

The ability to create instant “hangouts,” or circles where users can chat, is also a much-needed feature in multiplayer games. Gamers often go out of their way to set up communications groups where 100 people can chat about a game and coordinate strategy at the same time. Google’s application platform is apparently based on the Open Social standard technology, which is an alternative to Facebook’s applications platform.

Google may also be willing to give game companies a break when it comes to fees charged for its virtual currency. Right now, Facebook and Apple charge a 30 percent commission for transactions related to apps. Google is rumored to be considering charging only a 20 percent fee for transactions on its platform. That could make a good business for Google and make game companies more profitable. Kerner thinks that the percentage fee will be much lower, since Google isn’t as dependent as Facebook on commissions to make its profits.

“Google+ will compete by offering a substantially lower ‘tax’ on the sale of virtual goods and by being open, so gamers can come from other platforms,” said Lou Kerner, an analyst at Wedbush Securities.

One of the big questions is whether Zynga will be contractually allowed to make games for Google+. Google invested in Zynga last year, according to a filing with the Securities and Exchange Commission. But a deal between Facebook and Zynga over Facebook Credits appears to restrict what Facebook games Zynga can take to other platforms.

If true, that restriction against Zynga, which has 263 million monthly active users on Facebook, could create a wide-open battlefield on Google+ for social game developers.