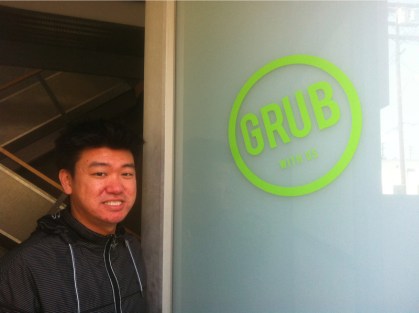 Two lonely entrepreneurs in Chicago, far from their homes in Los Angeles, hacked together a site in 2010 that let people sign up to meet them over lunch or dinner.

Their novel idea was an instant hit, and now, one year later, the founders of Grubwithus find themselves at the helm of a fledgling startup. Is this yet another shiny social service for venture capitalists to scoop up, or is the concept rooted in something more substantive?

Having just recently undergone a sweeping redesign with a raft of new features, the L.A.-based social dining startup that graduated from Y Combinator’s Winter 2011 class finds itself at the crux of a Silicon Valley counter-reformation. As more and more of us cultivate our connections online, the service aims to break down these walls, urging us to build relationships in so-called “real-life.” If it worked for the founders, why can’t it work for the rest of us?

Seeking the answer to this question, I spent some time personally “grubbing” at four different meals myself and visiting the startup’s trendy live/work space near Venice Beach to chat up the founders about their company and its vision, startup life in L.A., and the quirks of their new, eccentric headquarters. (Disclosure: I have a friendly rapport with the co-founders.)

The service works simply enough: People visit the site (and eventually a mobile app) to browse for meals, reserve and pay for one they like, then meet at a restaurant to have a family-style meal with others who took the plunge as well. Grubwithus brings strangers together for meals, but it also brings exposure and revenue to partner restaurants, solving a discovery problem without the “cheapness” or blandness of coupon sites.

There’s a no-strings-attached flair to the service that means anyone can approach it any way they like. It’s not solely online dating, or professional networking, or foodie indulgence, but it can be all of those things if you’d like it to be.

Co-founder Daishin Sugano is more brazen in his expectations, “These are people you’ve never met, that if you do, they just might turn into the best friends of your life.”

The site’s new design makes it easier to select a preferred approach, allowing people to reserve meals based either on restaurants, people or interests.

Grubwithus, which has already registered 22,000 users (doubling from 10,000 a month prior), 4,000 reservations and 450 establishment partnerships, also overhauled the back end, ensuring speed and reliability as they expand. 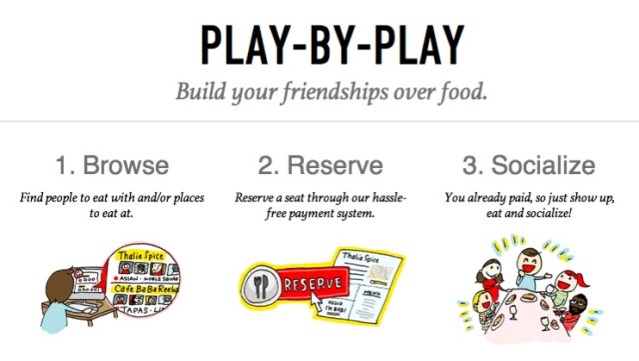 So who are these eccentric users joining the IRL counter-revolution, displacing mouse-clicks with chopsticks?

At the four meals in L.A. that I’ve attended, grubbers’ backgrounds have always been fairly consistent: They’re overwhelmingly single, in their twenties, college-educated, and focused on startups, technology, finance, consulting, or screenwriting.

Back at the unconventional domicile-cum-workshop that is Grubwithus headquarters, Sugano boasts how my observations neatly match the analytics the company has run on their user base. UC Berkeley, Stanford, NYU and Harvard dominate the educational backgrounds of users, while the work experience chart is crowned with employers like MTV in L.A., Google and Facebook in Silicon Valley, Accenture and others.

Though the data may reveal a clubby user-base, the redesign introduces new features that should allay the fears of those with less glamorous backgrounds.

For example, the new Interests feature allows like-minded people to navigate the site through the filter of common hobbies, occupations, sports activities, or virtually anything else. Following interests as varied as “Beach,” “Jazz,” or “Los Angeles Lakers” makes connecting with people you’ve never met as frictionless as possible. 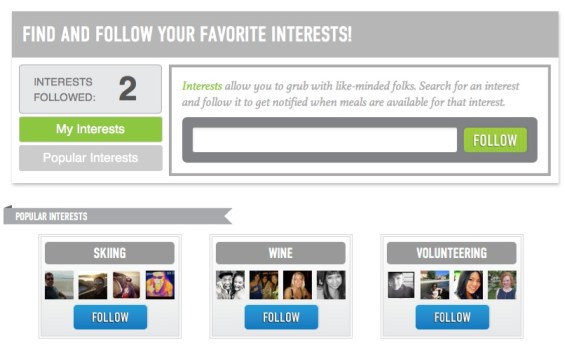 Grubwithus plans to expand using a new “Launch Squad” feature, prompted in part by requests from people around the world who want the site to open the service in their own hometowns.

The feature gives the passionate followers of the company admin-like access, enabling them to see statistics and usage data, and start a grassroots promotional campaign to have their city be the next to open up. If Grubwithus receives a certain number of sign-ups from any city, they’ll open it for grubbing.

If this sounds familiar, that’s because it is: In its early days, Facebook utilized this “pump-and-pop” methodology to generate anticipation at each college campus before opening up there.

In case it doesn’t pan out as smoothly, small teams are still sent out to each city to iron out any quirks. 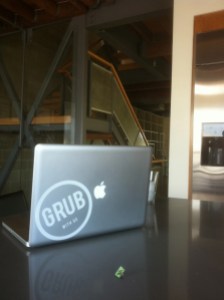 The redesign was a major product push that required hiring savvy developers to meet an aggressive feature roadmap. Amidst the tech boom, this was no small feat, but Sugano says that despite heavyweights like Apple, Google and Facebook sucking up talent like giant vacuums, they found a few technical stars who were tempted by their concept enough to turn competing offers down. 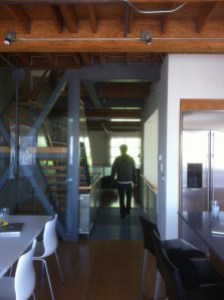 Sugano waxes poetic about their “lean” design methodology, clearly imparted  by Y Combinator. “[Our code] may be buggy, but we have to get it out there so we get that quick feedback,” he says. I’ve personally run into a few of these bugs; they’re not show-stoppers but are still rough edges.

When pressed to talk about startup life in L.A, Sugano’s demeanor was at first characterized by worry. “After Y Combinator, you keep asking yourself if you’ll have the same opportunities, the same access to awesome resources,” he said before his mood became decidedly positive. “But you realize you’re still close enough to Silicon Valley to physically meet with investors and advisors if you have to, but also far away enough to have a minimal tech scene.”

He alludes to the lack of an established industry culture in Southern California, which allows for, in his words, “a more open-minded feel, where you can be creative around the clock, eat late if you have to, and just do things that sleepy Mountain View doesn’t offer.” 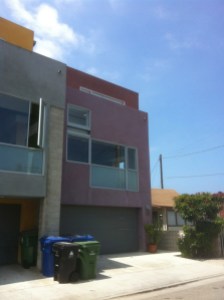 Echoing what VentureBeat’s Jolie O’Dell noted recently in her L.A. startup feature, Sugano believes that now more than ever the L.A. startup scene is burgeoning, citing his ties to other L.A. upstart BetterWorks. A year ago they were certain they’d base themselves in San Francisco or New York. Now they can’t imagine why they’d ever make that choice.

But when I referred to L.A.’s startup scene as “Silicon Beach,” the cofounder retorted, “I don’t like that term since beach implies laziness, and we’re anything but!” 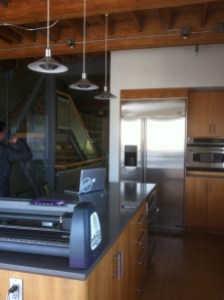 Having visited their digs, this retort is certainly justified. Despite their aggressive hiring, Grubwithus is still in that phase where few people wear many hats and all of them work extremely long hours. In fact, there isn’t much of a distinction between “work” and “living,” as evidenced by the company’s headquarters.

Just a few blocks from the beach, a modern and trendy live/work space built in 2003 called Bay City Lofts is where Grubwithus (and its team) call home. Visitors are greeted with a double-high-ceiling entrance before going upstairs, where the kitchen’s island counter is littered more with MacBook chargers than food crumbs. Across, a white board is filled with user interface schematics and snippets of code.

A blue gym mat is nearby, where people can “sleep, or code — their choice.” The irony of sleeping and working on bone-hard mats in an upscale loft is not lost on me.

Things are nice, but it wasn’t always this way. Prior to moving to L.A., the founders were coding most of the site out of a Starbucks, spending such long hours there that baristas offered free coffee out of pity. Lunch and dinner consisted of five-minute runs to a next-door supermarket for PB&J sandwiches. They would hardly finish their last bites before they hit their laptops again, furiously developing their site. They even did “the minimalist thing” for a little while, living out of their car, schlepping forty-pound stuff-sacks of their life’s possessions with them.

The entrepreneurial spirit is strong in Sugano and Lu, and they’ve built a company around this ethos. They indulge in stories of “scrappiness,” recalling how they essentially tricked Y Combinator to accept their application and other tomfoolery. Their spirit is that of hard work combined with playfulness. If you’ve ever been to a Grubwithus meal, you’ll know that the experience embodies just that mix. Turning perfect strangers into trusty friends over a bite of hot chow is hard work, even for the most extroverted. Perhaps you won’t connect with anyone, but it’d be a lie to say you didn’t have fun doing it.