The Humble Indie Bundle, a flash-sale for independently-developed video games run by Y Combinator backed Humble Bundle, has racked up more than $1 million in sales in less than a week.

The company’s last indie game flash sale generated around $1.8 million during its two-week sales period. That means that the current flash sale is on track to exceed the sales of the company’s last flash sale, in large part thanks to increased visibility on news aggregator sites like Reddit and Hacker News.

Humble Bundle has added a new game to the bundle, as well as a 14-day pass to play indie darling sandbox game Minecraft, to further promote sales. Markus Persson, the developer of Minecraft also known by his Twitter handle “@notch,” is the top contributor for the bundle after paying more than $4,000 for his batch of indie games.

Humble Bundle gives independent developers a way to publicize their games and compete with the major publishers in an industry that regularly churns out triple-A titles. This bundle’s breakout hit is a 2-D 8-bit platformer called VVVVVV, a game where players navigate obstacles by changing the direction of gravity. This quarter’s bundle also features “Crayon Physics Deluxe,” “Cogs,” “Hammerflight” and “And Yet It Moves.” 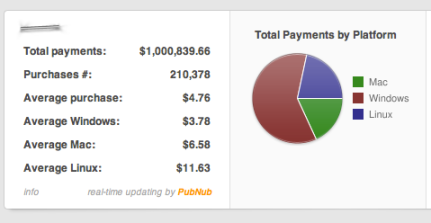 Much like in the Apple App Store, independent game developers struggle for visibility on distribution systems like Steam and the Xbox Live Arcade. Humble Bundle brought visibility to games like World of Goo — which ended up porting its game to the iPad because it became so popular.

Humble Bundle went through startup incubator Y Combinator after 2009′s Humble Indie Bundle (put out by a group of indie game developers) ended up being a runaway success. The sales let gamers pick up a number of indie games that don’t have copyright protection software.

Gamers can pay whatever they want for a bundle — which could be anywhere from 1 cent to $6,000. Gamers also decide what percentage of the fund goes to charity or to the developers and whether to give Humble Bundle a “tip,” which is around 5 percent by default. If most gamers used the default payment schedule, that means Humble Bundle picked up more than $90,000 in its last indie game flash sale.

This is the third bundle the company has launched. It launched a “Frozenbyte” branded bundle that included games from one specific developer. The company’s first bundle included indie darlings like side-scrolling puzzle game Braid and survival horror game Penumbra.