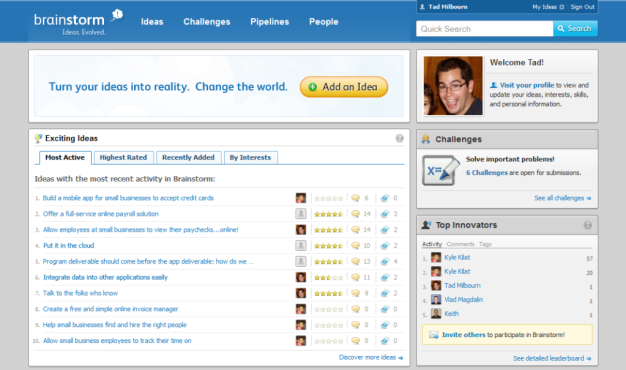 Every company is full of smart employees with great ideas, but it’s often difficult to make those ideas a reality. That’s what Intuit is hoping to solve with Brainstorm, a new web-based collaboration tool launching today for organizations.

“We want to empower employees to change their organization,” Tad Milbourn, senior product manager for Brainstorm, told VentureBeat in an interview.

On the surface, Brainstorm appears to be yet another business collaboration tool — a place where you post updates and hope co-workers respond. But Milbourn tells me that it differs from the likes of Chatter by focusing on connecting ideas to the right people, and connecting ideas to other ideas. The competition predominantly focuses on collecting collaboration data, Milbourn said, but it’s the conversation around the idea that makes the difference between a mere pipedream and something that sparks action.

Ideas posted on the site can get rated and commented on by co-workers, but they also serve as self-contained workflows for bringing those ideas to life. Additionally, Brainstorm users can create Challenges specifically for their organizations, and a Pipeline to help organize active ideas. Ideas can be instantly shared to anyone in an organization, as well as to specific groups within companies on the off-chance you don’t know someone in a particular department.

Milbourn and Intuit’s Vlad Magdalin created Brainstorm as an internal tool during the company’s unstructured time (time when engineers can work on pet projects). After launching Brainstorm within Intuit, participation jumped 500 percent and ideas created jumped 1000 percent. It’s clear that Brainstorm had a big impact for the company: it led to new business going up by a factor of six, and the amount of time it took to deliver a product to market sped up by 60 percent. Intuit’s new ViewMyPaycheck service, as well as over 200 products released in the last three years, first started as Brainstorm ideas.

General Electric has already been using Brainstorm for a few months, and it’s already had a major impact: “Brainstorm had an immediate effect. Within a few weeks, we had seven significant ideas, two of which are driving rapid prototyping that will lead to positive customer impact,” Todd Dunn, General Electric operations director, said in a statement.

Intuit offers a 30-day free trial of Brainstorm for new users, afterwards pricing starts at $5-a-month per user (with a minimum of $500). While the pricing is similar to other software as a service (SaaS) offerings, Intuit would be better off dropping the minimum fee to something small organizations can better afford.