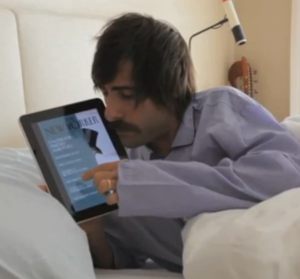 Publishers have struggled with trying to make money off digital publishing since the dawn of the Internet. But The New Yorker’s iPad app, which has had strong sales compared to its peers, might be a model to look to when it comes to successfully selling a magazine in digital form.

The New Yorker on Sunday revealed that it had 100,000 iPad readers, including nearly 20,000 who purchased subscriptions for $59.99 a year. On top of that, more than 75,000 print subscribers have downloaded the app for free and a few thousand others opt to buy single issues for $4.99 each week.

“Our readers have historically been early adopters,” Pamela Maffei McCarthy, the magazine’s deputy editor, told VentureBeat. “We wanted to make sure the experience of reading was just as comfortable on the iPad as it is in the magazine.”

The New Yorker’s iPad edition sales numbers are higher than those of any other Condé Nast publication, including Wired, GQ and Vanity Fair. One potential reason for the strong sales is that New Yorker readers are more enthusiastic about the product. “We have a very passionate reading base,” McCarthy said.

Another reason is that the app emphasizes clear, readable text instead of flashy images – a feature that caters to serious New Yorker readers. “There’s no question that our first goal was to make the app reader-friendly,” McCarthy said. “It was a conscious decision to make the app simple and elegant, like the magazine.”

McCarthy pointed out that the iPad app has, on average, eight to 10 iPad-exclusive features, including posts from one of the New Yorker’s blogs, New Yorker tweets, infographics and slideshows. “One iPad-exclusive from this week’s magazine is an infographic that shows step-by-step how the raid on Osama bin Laden’s compound occurred,” McCarthy said. “Elements like this show how we’re giving our digital readers attention.”

Condé Nast itself has shown a strong interest in playing in and trying to monetize the digital side. Outside of most of its magazines having iPad editions, the publisher just inked a deal with Flipboard to include full-page advertising when articles from its brands show up inside Flipboard’s iPad app. Brands that will have ads include The New Yorker, Wired and Bon Appétit.

What do you think of the future of digital publishing? Do you think The New Yorker is a model other publishers should follow?