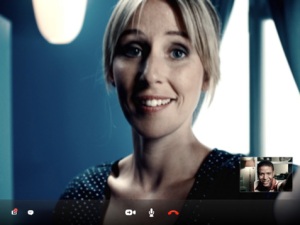 After a few well-publicized launch mistakes, the much-anticipated Skype for iPad application is finally here.

“Skype for iPad is beautifully designed and optimized for the iPad,” wrote Rick Osterloh, head of product management for Skype, on the company’s official blog. “The large iPad screen is perfect for bringing Skype video calls to life, in either landscape or portrait view, and because it is on the iPad, Skype video calls can be made at the beach, in a car or even lying on a couch.”

After a leaked launch video a month ago, the app was prematurely launched early Tuesday morning and immediately pulled from the App Store. “To ensure your best Skype experience, we’ve temporarily removed Skype for iPad which went live prematurely today,” the company said via Twitter.

And now, just hours later, the official version is out. The Skype iPad app is a better general video calling solution than Apple’s FaceTime because it works across multiple platforms, including PCs, Macs, iPads, iPhones, and Android devices. The app does everything you’d expect it to, with two-way video calls, instant messaging and SMS texting, and it even works over both 3G and Wi-Fi.

Skype is not the first all-platform video chat iPad app out the gate. Fring, a similar but usually lesser quality service, launched its own iPad app in late June. That app was notable in that it offered free group video chat.

Additionally, Skype made news recently when it partnered with Facebook to bring free one-on-one video calling to Facebook’s more than 750 million users. Facebook CEO Mark Zuckerberg hinted that more features, such as group chat, would be coming in the future.

Microsoft paid $8.5 billion to acquire Skype back in May, and the deal will go through as long as regulators approve. The deal means Skype will likely see integration with popular Microsoft services like Kinect, Windows Phone 7, and Office 365.