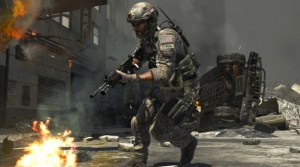 The company is the largest independent video game publisher and its results are a bellwether for the core console video game and PC game businesses.

The report drove Activision Blizzard’s stock up in after-hours trading. Earlier in the day, the stock closed up 1 percent at $11.82 a share. It is now trading around $12.25 a share, or 3.6 percent higher.

Bobby Kotick, chief executive of Santa Monica, Calif.-based Activision Blizzard, which is majority owned by Vivendi, said in a statement, “Our better-than-expected second-quarter performance was driven by record digital sales of our online-enabled franchises.”

For the second half of the year, Kotick said that audiences will likely be drawn to the company’s three major releases: Call of Duty Modern Warfare 3 (pictured above), the latest in a series of combat games that has generated more than $1 billion a year for Activision Blizzard; Call of Duty Elite, a social network for Call of Duty fans; and Skylanders Spyro’s Adventure, a hybrid toy and video game.

To date, Call of Duty players have logged more than 2.2 billion hours of online game play.

The company has relatively weak guidance for the third quarter, but it is worth noting that Activision Blizzard has not included any revenue this year from Blizzard Entertainment’s Diablo III. That game is expected to arrive this year, but Blizzard has not announced a formal launch date for it yet. Overall, Activision Blizzard raised expectations for GAAP revenues for the year from $4.05 billion to $4.18 billion. It also raised guidance for earnings per share from 61 cents to 68 cents. In the third quarter, the company expects GAAP revenues of $650 million and earnings per share of 5 cents.