I meet the rest of the One team when I visit their live/work loft in downtown San Francisco, right above the famous Powell Street cable car turnaround. The team members can look out their window and see crowds of people gathering by the cable cars, most of them not interacting with each other. 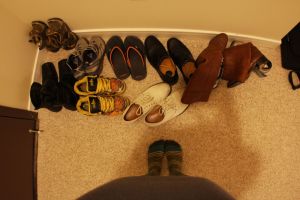 Upon entering the loft, I am asked to take off my shoes. The loft is immaculate. Their mothers would be proud. It isn’t just for show, either. These guys are focused, and they won’t let clutter get in the way. They sleep in two bunk beds upstairs, tucked behind a movable wall. Downstairs, where the dining room table should be, is a massive desk they crowd around and work on.

Levy and cofounder Michael Callahan work with two other guys on the project: Dan Glazer, founder of eatcu.com, and 20 year-old Ethan Berl, a software engineer from Princeton. He tells me he’s headed back to school in the fall, but will continue to work on One remotely. The guys are sweet and intelligent. You instantly like them. They aren’t partying, like you would expect them to. Callahan doesn’t drink alcohol, and two are underage. I laugh out loud when they talk about how Berl, who looks like a 16 year-old, is the group’s party animal. Then I realize I’m the only one laughing.

“We try to hire competent people because we want to be able to sell them,” says Levy. 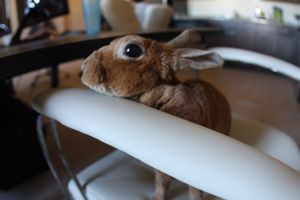 A brown rabbit, Peek-A-Boo, hops around asking for a head scratch. She’s Callahan’s rabbit, but the whole team adores her. But their affection isn’t just reserved for the pet: The guys all respect each other, too, and they aren’t afraid to show it. Since Levy had the spotlight earlier in the day, he lets Callahan do most of the talking at the headquarters.

Callahan started mulling over the concept of One in 2006 during a visit to San Francisco. He was in town for meetings for his first company Audeo (creator of the first voiceless cell phone call, named one of Popular Science’s Inventions of the Year in 2009), and on the downtime, he walked around Market Street.

“I felt alone. That feeling is very irrational but very real,” says Callahan. “It doesn’t make sense to feel that way when you are surrounded by a million people. I thought, I can fix this.”

So he started studying people. He watched people in a mall and saw every person sitting alone in the food court had a device in their hand. Those devices provided a retreat to ward off the social stigma of being alone. They needed something to focus their attention on. People are looking for content to keep them company. 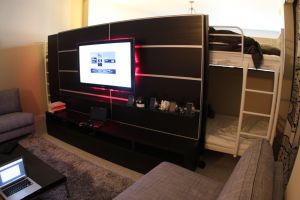 Callahan met Levy at University of Illinois in 2009. The then-17-year-old Levy had been invited, as a high school student, to speak to a group of college students about entrepreneurship. Callahan was there on a panel. They met afterwards and talked for hours. Later that year they would meet at another conference (Levy’s NextGen conference, more on that later.). That’s when the handshake happened that would start the two down a path to One.

They started testing One at University of Illinois by inviting students into a waiting area, telling them to wait for 20 minutes so they could “set things up” and then watching the strangers interact. They would tell each other their names, majors and hometowns. But that was as far as it would go. Then Callahan would bring in devices with the One app.

“Within five minutes of using the device, everyone was engaged in conversation,” says Callahan. “They moved to sit closer together. They were happy to connect. They just needed the catalyst to get going and connect relevantly.”

When asked about One’s competition, Callahan replies that “If it has been done to the level I want it to, I would be using it. Every one would be.”

What about Google Latitude? 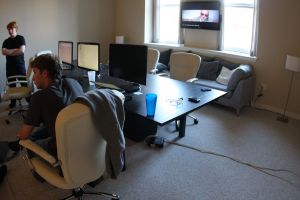 “That shit drove me nuts,” says Callahan. As he curses, Levy squirms in his chair (a hoodie drapes over the back). “We’re introducing microlocalization. You shouldn’t just have a rough idea of people that are miles from you, but be able to introduce you to the person seated right next to you.”

One also offers a discovery platform to expose users to new things based on their preferences. The goal is to help users discover and go deeper into the areas they are interested in.

With all of this personal information and accessibility floating about, privacy could become an issue. The company says it is obsessed with privacy.

“It is not possible to do this without being extremely stringent on privacy,” says Callahan. “Everything we are doing is not possible without it. If you don’t have the thing in common with the other person, you won’t know it. In other words, the only things people will know about you are the things you share in common.”

He adds that One will be a tool to find people who like obscure things.

“This is something the world doesn’t cater to,” Callahan says. “We’re addressing the long tail of the things other people like.”

How is One going to make money? When I ask this question to the group, Levy nods to Callahan.

“It’s not our primary concern at this moment,” says Callahan, as he looks me dead in the eye. “Our goal is to address our audience’s problem. We have the triple-positive standard. We create something valuable that is good for you and good for the 3rd party. Most business models hit two of those, at best.”

Then he says “no monetization of ads is ever good for the consumer.” I ask him to repeat that, and he does. They mean it.

“There’s something special about this kid.”