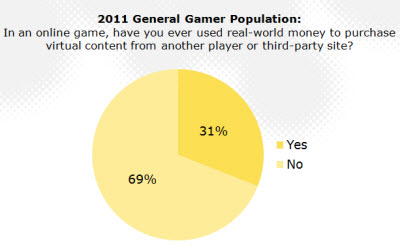 One out of every three online gamers is spending real money on virtual goods, according to a new study by Visa’s PlaySpan and VG Market Study.

The study also shows that men and women are continuing to behave in different ways when it comes to online game spending. This kind of information could help game companies better target their customers.

About 31 percent of the overall online gamer population has used real money to buy virtual content from another player or a third-party web site.

About 48 percent of the general gamer population said they have purchased in-game currency in the past 12 months. About 47 percent have bought maps and new levels. About 29 percent have purchased armor and equipment. Some 45 percent said they buy virtual items once a month, with 72 percent saying they would spend more or about the same compared to last year. About 67 percent said they were spending more because they were spending more time playing online games than last year, compared with 42 percent saying they have more money to spend. About 32 percent said ease of purchase is the reason for the additional spending, while in-game rewards were cited 30 percent of the time.

“The digital goods market may be enormous, but it’s still part of the Wild Wild West in terms of targeting users based on behavior and spending preferences,” said Robb Lewis, director of marketing at PlaySpan, which was acquired by Visa earlier this year.

Females are three times more likely than men (34 percent vs 13 percent) to use Facebook Credits to purchase virtual items or content. Females spend $111 vs $74 for males in MMOs, and they spend $86 vs $77 for men for casual games. In casual games, women spend $51, or 40 percent more than men ($36) from first-party publishers and $62 vs $28 for men from third-party publishers. About 37 percent of women are likely to buy a virtual item to decorate a page, persona or avatar. Only 19 percent of men spend money on those things.

Those who spend money on sports spend an average of $106 on first-party games and $132 on third-party sites, compared to those who read books, who spend $65 and $49 respectively.

The data came from July interviews with more than 1,000 gamers who were part of a VG Market database. 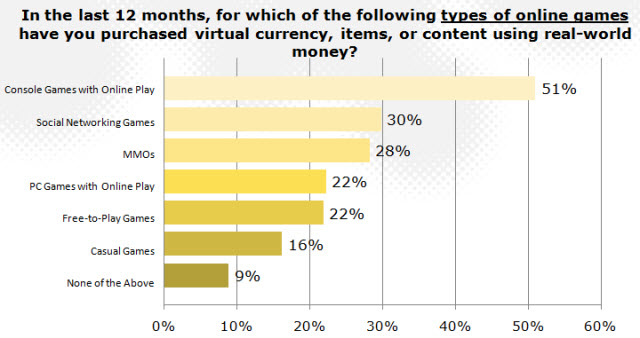 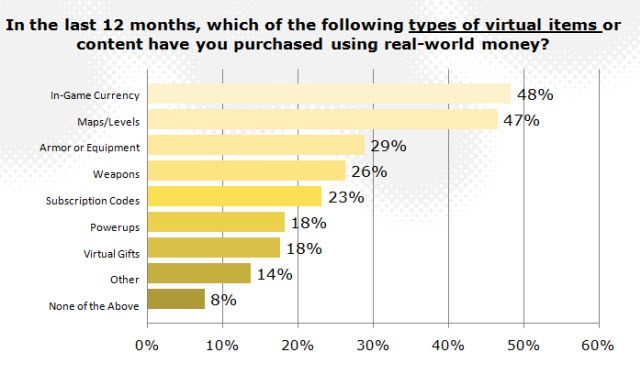