During E3 2009, Microsoft released an incredibly well-received, promotional buzz trailer for the then-titled Project Natal that would later become the Kinect motion-detection system. The trailer debuted to incredible interest and applause at the amazing feats depicted in the video (and that’s not sarcasm — people assumed this would be the next level of gaming and were thrilled to see it taken a step higher).

Project Natal boasted an honorable assortment of features and functionality compared to its predecessor, the Xbox Live Vision Camera, which featured picture quality on par with the Game Boy Camera. Seriously, Daguerreotypes had better clarity than that thing.

Finally unveiled as Kinect the following year, we all simultaneously wondered, “What the hell just happened here?” We just saw a kid transmute his skateboard into a video-game object and now a year later we’re in some kind of freaking circus act? All we get to see was a white guy dancing like a white guy and a young Asian girl giving a handy to a tiger? What the hell went wrong?!

Under U.S. law, I'm not even supposed to be showing you this.

One year (give or take a few months) after the official release of the Kinect, we are nowhere near coming to the grand acts displayed and showcased in the Project Natal trailer. Here’s what the original preview trailer promised us, and exactly what they failed to deliver on.

1) …hold a conversation with you.

What you see in the Natal trailer: Ian, a scene kid with a prominent hair helmet, approaches a nondescript martial-arts fighting game wherein a generic kung-fu guru taunts the gamer with, “You’ve come back for more?” Ian responds, “Let’s do this!” And the game subsequently laughs at him and responds with a mocking tone. Ian then kicks Master Wong straight in the dong.

The Kinect reality: At first glance, this just seems like a generic transaction of comments (assuming you’re speaking to somebody in real life), but Ian is speaking directly to a character in a video game who can apparently acknowledge and respond to answers more complex than a simple “yes” or “no” (and we’ve been screaming “no, no, no” at bad games for decades now). The game scoffs at Ian’s rebuttal to its challenge and therefore actually shows some level of thought depending on the answer given.

The pseudo-Japanese game shown in the trailer is also exactly one Hot Coffee mod away from being an ESRB nightmare.

No Xbox title presently available offers this level of linguistic understanding. Yoostar 2, a game where you reenact scenes from popular movies, comes closest by judging your performance based on a provided script, but the quality of judgment is so poor that it’s hilarious, especially if you’re playing this in a party setting and you’re surrounded by ambient noise from other guests. You could hire the original actors themselves to repeat their lines, and the game will still tell you that you have the acting talent of Howie Mandel.

2. …detect the kinds of movements shown.

What you see in the Natal trailer: A family is sitting down to play a formula-one racing game, where the daughter mimics the motions of driving and her family follows suit by leaning side to side with the turns the car makes. Her father stands up and replaces a tire on the car during a pit stop. In a second hypothetical title, a kid is seen playing a Godzilla-type, city-destruction game and swings his arms around to wreck buildings; he then makes a roaring sound and assumes a pose while the monster breathes fire.

Natal trivia: Three of the four people in this picture are contemplating suicide.

The Kinect reality: Kinect can detect motion. I’m not going to say it can’t because that’s the entire focus of the peripheral, but I will say that while it does indeed detect movement, it definitely doesn’t do it at the caliber required to sense rapid “Z-axis” movement akin to replacing lug nuts on a tire or to see when you’re making a goofy roaring face to tell Bizarro Godzilla to give macrophiles a shameful and awkward erection.

If you want the Kinect to see you do something, you have to move in very pronounced motions because it seems only large movements can be seen by the stereoscopic cameras on the sensor. This works great for exercise games where you have to run in place or otherwise be full body active, but when all you’re doing is making a pushing motion, the Kinect can’t see this and doesn’t do anything. And if it does actually do something, then its detection is on par with the Nintendo Wii in terms of the likelihood that you’ll suffer first-world-country ragequit and kick in your plasma screen T.V.

Additionally, the Kinect doesn’t like when there’s a bunch of movement taking place all at once. The entire family moving side to side while the daughter drives? Doing that will cause your Kinect to overheat and explode. No, seriously, it’s just too much input and it will simply not detect your hands or the steering motion. It’ll be like driving a Toyota.

What you see in the Natal trailer: After kicking the Japan right out of Master Wong, Ian returns with a skateboard and instructs the Xbox to scan his deck into what I can only assume is the highly anticipated game Tony Hawk: Tony Tony Tony Tony Tony Tony. The Xbox takes two pictures of his skateboard and transmits them into a usable custom skin in his game. 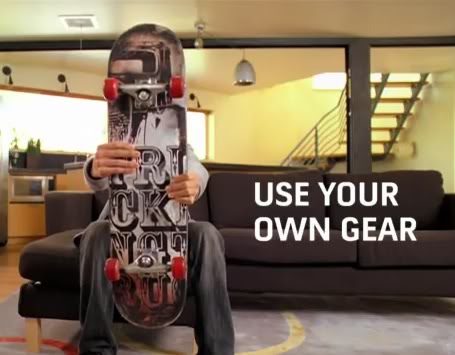 This skateboard is one of only three pieces of furniture in the house.

The Kinect reality: The Kinect sensor can take pictures of things — no kidding — but as far as I’m aware, there is absolutely nothing that features something of this fashion in any game; it’s simply too intricate of a concept for it to work properly with the Kinect.

There are too many variables that would screw with the results, such as lighting and whether you happen to own a skateboard. If there was a game out there that could properly translate mindless jumping and goofy stances into a skateboarding game, then we wouldn’t have any use for the worthless miniature kayak that came with both Tony Hawk: Ride and Tony Hawk: Shred.

Upon watching this trailer, the first thing I thought of was, “What happened to the kid’s fingers?” No, really. Where did they go? His hands are obstructing a ridiculous portion of the skateboard, but the game still somehow magically removes them from the complicated and intricate design shown on the bottom of the board. The second thought that entered my mind was “what’s stopping you from scanning your dong into the game and using it as a skateboard?”

What you see in the Natal trailer: A girl calls her obligatory black friend, Sarah, to talk about a party they are both going to. Sarah asks if her friend has a dress; she says "no" and proceeds to vomit profusely. Sarah offers her condolences and then says she has a solution because she found a dress for her friend. Sarah then waves like an idiot at her Xbox to cycle through a bunch of outfits in an unnamed dress-up type of menu and picks out a black dress that unnamed girl of dubious ethnicity “picks up” and places onto a picture of herself, which then turns out to be a 3D model of her body that can rotate depending on her stance in front of the television. 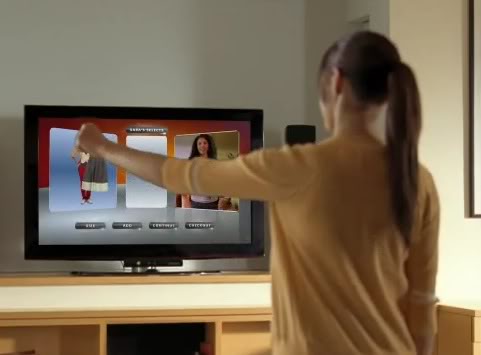 "I'm just no good at this boxing game…."

The Kinect reality: Seriously? This is just stupid. The amount of attention to detail it would take to set up something like this is ridiculous — not to mention the sheer unfeasibility and uselessness of it all. If anything, this demonstration poses more questions than answers. Where did all of those outfits come from? Are they downloaded from some kind of JC Penny catalog? How’d they get that perfect model of the unnamed girl in the sassy pose? What if some grotesquely fat person tries to use thisfeature…does this program support XXXXL t-shirts with Internet memes and cats on them?

What you see in the Natal trailer: Ian returns again with his adopted family for a quiz-show game, where he attempts to play rock-paper-scissors with the host before blurting out the name of a random American president to the question, “What is the capital of France?” Upon giving his answer, he and his father have a quick contest to see who can make the best bewildered expression followed by the game-show host confirming a correct answer. Of importance in this scene is the fact that the game addresses Ian by his first and last name (Dixon). The host then sets comedy back a decade by making a Chuck Norris joke. 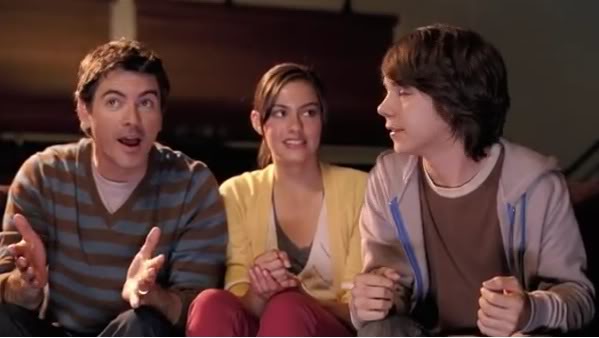 "His wiener was this big. Swear to god."

The Kinect reality: Again, I’m not really going to harp on the whole “you have to do more than pretend you’re a horse gynecologist to get the Kinect to see you” thing, but I do want to point out that it’s simply not possible for a game to seamlessly incorporate something as complicated as a first and last name into a sentence without sounding roboticized* and choppy. There are games out there (such as Grid) that have some prerecorded names you can choose from that the voiceover will announce throughout the game, but generally, these things only cover the rudimentary bases. If your name is Joe, then the host will call you by your name, but if it’s something as exotic as André, then I hope you like being referred to as “contestant.”

(Also the fact that they’re dominating the black family by a 900 point margin is pretty racist.)

*Fun Fact: I have not used this word at all since I wrote awful Sonic the Hedgehog fanfiction in elementary school.

I understand that this trailer is just a conceptualization of what Microsoft wants (or wanted) to do. I get that. They even say it onscreen for the first five seconds of video, but part of the bargain when you’re making an announcement — an E3 announcement at that — is at least coming close to what you’re showcasing in your trailers and previews. Out of all of the wonders demonstrated in the video by Project Natal, do you know which of them the Kinect can actually do?

Video chat. You could do that with the Xbox Live Vision Camera.

In addition to moonlighting as both a developer and artist for various browser-based titles,André Bardin is a freelance writer in the video-game industry. Presently, he maintains a column at GatorAIDS and is employed by indie studio TrackMill. André is also an ex-employee of triple-A developer Miniclip SA. He can be reached via email (andre [at] trackmill [dot] com) for any and all inquiries.