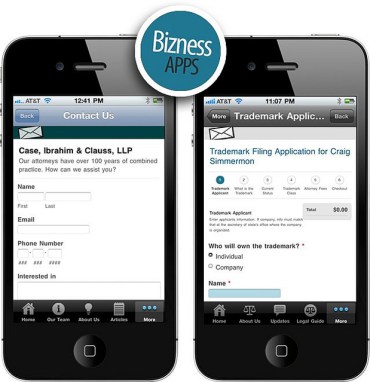 This article is part of a series of posts about DEMO alumni and news of their progress. Bizness Apps launched at DEMO in Spring 2011. Check out more at DEMO.

Bizness Apps, maker of affordable mobile apps for small businesses, announced that in nine months it has reached 1,000 created apps and a new partnership with online form builder, Wufoo.

Creating mobile applications can run a company up thousands of dollars. You need developers, a creative vision, the resources to build and the time. Small and medium sized businesses (SMBs) generally lack these requirements. Bizness Apps created industry-specific templates that SMBs can overlay with their own branding and offer in the Apple and Android app stores.

The company originally offered iOS apps only, but now offers a dual iPhone/Android “upgrade” package for $59 a month. “We see 90 percent of our clients getting both Android and iPhone apps. The market is getting to a point where if you have both, you can double the amount of people [your business] is exposed to,” Andrew Gazdecki, chief executive of Bizness Apps told VentureBeat.

Upgrade package aside, Bizness Apps has seen about a 50/50 ratio of iOS to Android apps created.

Of the 1,000 created apps, Gazdecki has seen the gamut. He says companies make apps for kid day camps, clubs and more. But the majority of his business comes from restaurants, realtors and law offices. Other companies like AppMakR and SwebApps provide easy app creating services, but don’t cater specifically to these markets or SMBs, Gazdecki said.

The company’s newest feature is an obvious nod at businesses: forms available on apps using Wufoo.

Forms exist as a separate tab on the bottom of the app, where potential customers can fill out “contact me” forms, apply for mortgages, register for workshops, join mailing lists and more.

“Being that [Wufoo] is such a flexible platform, we can create a form for any kind of business,” said Gazdecki.

Bizness Apps was introduced to Wufoo through a client recommendation. Gazdecki says the partnership was necessary, and that taking on a project like the forms integration “is another startup in itself.”

In the future, Gazdecki hopes clients will keep their apps free and says he provides encouragement to that end. “The way we view mobile apps is like the way we view the internet,” he said. “We wouldn’t charge your customers to view your websites, so we endorse the same view for mobile.”

Bizness Apps plans to release an HTML5 app in the next month but would not give us any further details.

The company was founded in 2010 and demoed at the Spring 2011 DEMO conference. It has eight employees headquartered in Chico, Calif. Last November, Bizness Apps received a $50,000 round of angel funding from Build.com chief executive Chris Friedland and CollegeScheduler.com founder and chief executive Robert Strazzarino.