No Sunday slumber for developers: Apple released its fifth beta (pre-release) version of iOS 5 today. The update, which is only available to developers, can be downloaded wirelessly to iOS devices. 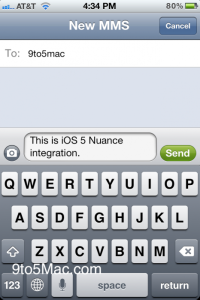 Above: Image courtesy of 9to5Mac

There are still bugs in the beta, such as volume sliders not updating when volume buttons are activated. But the update provides hints of some big new features.

9to5Mac reports that speech to text capabilities are built into the iOS 5 keyboard in this release. This indicates Apple may actually be using technology from Nuance, a voice recognition software company, as earlier rumors suggested. In June, Macstories reported an internal iOS 5 screenshots leak showing “Nuance Diction” controls.

In the current update, the feature appears as a microphone icon nestled next to the keyboard space bar. When clicked, a page showing the icon appears. The page stays up for as long as you are talking. When talking ceases, the screen reverts to the keyboard page, with your spoken words appearing in the text box.

Nuance recently purchased iPad notetaking app Noterize, leading to hopes for a built-in speech to text note taking option.  However, the capabilities will only be available on Apple’s “smaller products,” the iPhone and iPod touch, according to an unnamed source in the 9to5Mac story. This is surprising given the ri 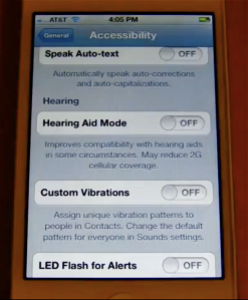 se of iPad usage for education innovation, with companies like Kno and Inkling creating whole textbooks on the device. iOS 5 is still in beta, however, nothing is set in stone.

A hearing aid functionality was also discovered by YouTuber NatesTechUpdate (video below), which can be toggled on or off from the accessibility page, found in settings. The feature will improve use with hearing aids, but may reduce 2G cellular coverage, according to the feature description.

Apple encourages developers to back up their content before installing the iOS 5 beta 5 to avoid bugs such as loss of photos after iTunes backup restoration. See the full change log on BGR.