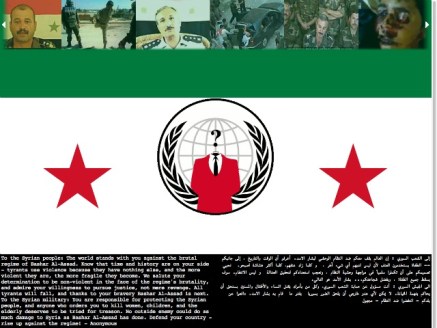 In a bold hack to start off the week, the hacktivist group Anonymous has attacked and defaced the Syrian Ministry of Defense’s website, in a move meant to rail against Bashar Al-Assad’s regime.

The hack comes amidst growing unrest and violence in Syria. At the time of this post, the Defense Ministry’s site has been rendered completely inaccessible, but you can view a mirror of the attack at Zone H. The group brought attention to the attack on its AnonymousIRC Twitter account.

The hack showed Anonymous’s logo on top of the Syrian flag, videos depicting the country’s tumultuous unrest, and also contained a message in English and Arabic. Addressing the Syrian people, Anonymous wrote: “The world stands with you against the brutal regime of Bashar Al-Assad. Know that time and history are on your side – tyrants use violence because they have nothing else, and the more violent they are, the more fragile they become.”

Anonymous also addressed the Syrian military, saying it’s responsible for protecting the country’s people, and that anyone who orders them to hurt or kill women should be tried for treason. The attackers went on to write, “No outside enemy could do as much damage to Syria as Bashar Al-Assad has done. Defend your country – rise up against the regime!”

As The Next Web points out, the hacked site’s source code says it was seized by a hacker named “Poppy.”

In June, the country’s Web access was shut down as mass protests reached their height.