Florida-based Operating System Solutions has filed a patent infringement lawsuit against Apple, the website Patently Apple reports. But the surprising part is that the patent in question was originally owned by LG Electronics.

Count 1 in the court’s document reads, “Apple sells or offers to sell within this district, computer systems, including but not limited to the MacBook Pro, that utilize the Mac OSX operating system that infringes at least claim 1 of the OSS [Operating System Solutions] Patent.”

The patent abstract describes it as “a method for quickly booting a personal computer system using boot configuration information on memory and the attached devices that was created and saved in a hard disk at the preceding boot process.” Its quick boot method is a multi-step process (see flow chart below) that involves saving a computer’s boot configuration to memory so that it can boot up more quickly in the future. According to the lawsuit, Apple’s OS X violates this method in the patent.

Patently Apple points out that the original owner of the 2002 patent was LG Electronics, but it was subsequently reissued to Protimus Technologies in 2008. It’s unclear how the patent found its way to OSS — a company which can’t even be located via a Google search — or if LG still has any ties to the patent. Since OSS has no Internet presence, it’s likely that it’s a patent holding company (also known as a patent troll). 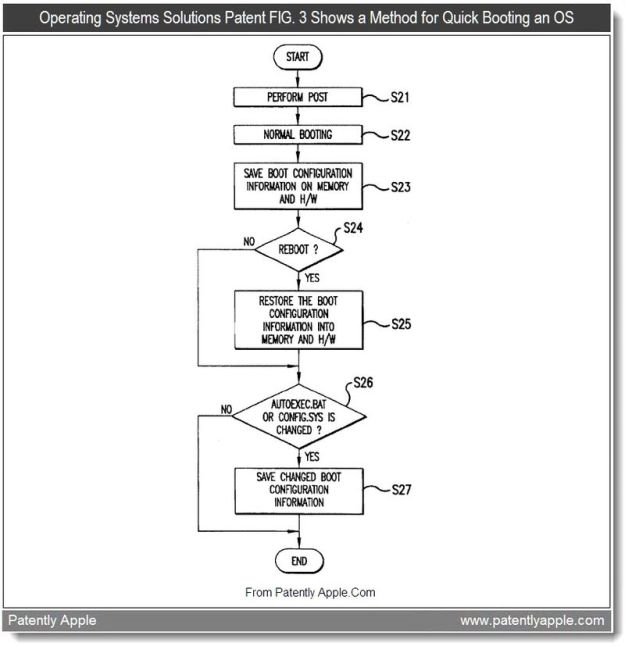