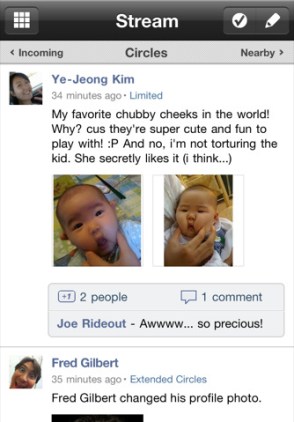 Google’s Google+ iOS app can finally run on the iPad and iPod Touch — but don’t get too excited, iPad users, as the app still isn’t optimized for the tablet’s interface.

Today’s update isn’t a major one, but it’s necessary to fix the Google+ app’s inexplicable lack of support for the iPod Touch. The Google+ app launched three weeks ago, and it only worked on iPhones. It makes sense for Google to take its time developing a more robust app for the iPad’s larger screen, but the lack of iPod Touch support just didn’t make much sense.

The additional device support arrives today with an update for the Google+ app, which brings with it additional settings for Huddles group chat and aggregated notifications for Circles.

Most likely, Google didn’t support the iPod Touch initially because it wanted to get the Google+ app out the door as quickly as possible. The company managed to deliver the iOS app just weeks after Google+ launched (it also had a very functional HTML5 web app available right at Google Plus’s launch).

The next big update for the Google+ iOS app will likely be an iPad interface, though that will probably come after Google optimizes its Android app for tablets. I’m also eagerly awaiting the addition of Hangouts group video chat in the Plus mobile apps.