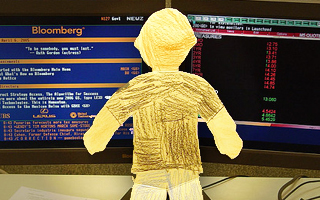 The biggest question on every mind in Silicon Valley relates to our collective worst nightmare: Could a macroeconomic collapse trigger another dotcom-esque bust?

For at least one VC, Draper Fisher Jurvetson partner Tim Draper, the market for U.S. startups just got noticeably chillier.

“In investing in start-ups globally, we at Draper Fisher Jurvetson try to view governments as competitors for our capital and for the great entrepreneurs of the world,” Draper told VentureBeat.

“Countries with the best rule of law, the best bankruptcy protection, the freest trade, the freest markets, and the best credit ratings are the countries that rule the day. The U.S. just dropped a notch.”

While many venture capitalists and angel investors were shaken by today’s wild market fluctuations, not everyone agrees with Draper’s view.

Nevertheless, analysts are saying companies with pending deals, including funding and IPOs, have some cause for concern today, especially if the market doesn’t right itself in short order.

Although the tech microeconomy and private equity in general operates somewhat differently from the larger market of publicly traded stock, today’s reactions also rest on the larger issue of the United States’ downgraded credit rating.

On a political note, Draper added, “I hope the U.S. changes structurally so that spending is limited to the amount raised in taxes the year before. With this simple change, the U.S. will again be the number-one preferred country to invest in.”

“I am frustrated that America is in the process of falling behind Asia,” Schmidt said. “I was recently in Asia and the Asian view of America is that we are the past.”

Other VCs are more optimistic about the long-term trends.

“I’m sure people are anxious about their own portfolios, but for startups, it’s so far removed from their day to day lives. They’re still concerned about getting the next customer and closing the next round,” Saad Khan, a partner at CMEA Capital, told VentureBeat.

“I don’t think one day or one week’s stock market fluctuations are going to impact that. In Silicon Valley, things are pretty insulated from the rest of the U.S. in general. The ecosystem is alive and thriving. Leases have doubled for commercial real estate for places like downtown Palo Alto or Mountain View,” Khan said.

“It’s still very much boom time here. This year’s activity has been more active than I’ve seen in years.”

But angel investor Christina Brodbeck voiced a concern common to many angels: If enough personal wealth is lost in a market freefall, there won’t be money leftover to play with when promising young startups come courting a seed round.

“It definitely affects my angel investment thought process when an Armageddon-like situation happens in the market,” Brodbeck told VentureBeat. “The funds that small angels, like myself, invest are coming from personal gains in the market. If the market goes in to free-fall, I end up potentially being a lot more cautious about future investments, as I may not have as much room to play with in the coming weeks or months.”

Still, regardless of what the market does in the weeks to come, “Any company with an IPO planned for this week will probably pull it,” said Dow Jones Investment Banking deputy managing editor John Morris.

“If the IPO market shuts down for a while,” he continued, “that could affect later-stage venture-backed companies. They might need to go back to the VCs for more money.”

But while companies in the process of filing for IPOs have some cause for concern today, Morris said temporary fluctuations due to the credit rating change shouldn’t have much impact on startup investment — with the exception of rounds that are closing or about to close right now.

“In the short to mid-term, it probably won’t affect early-stage companies so much, since the VCs expect to have their money tied up for several years in any event. But it might delay the closing of any venture funding rounds scheduled for this week as people wait to see how catastrophic this is.”

And what if the result of this wobble in the stock market is completely catastrophic?

“Certainly it’s a concern if there’s a general malaise that lasts for a long time,” said Khan. “Macro trends do have an effect on Silicon Valley. But it’s hard for me to predict [another tech bust]. Stock market sentiment is certainly important, but I hesitate to make any judgment that doesn’t talk about fundamental market drivers as opposed to a rating change from one agency.”

And for those looking for a second bust, Khan said, “The infrastructure of the web is completely different now, and the next generation of companies are going to be bigger and faster than ever. I think we’re just at the start of a new innovation cycle.”

“I really hate pontificating on the future,” said early-stage specialist Babak Nivi of AngelList. “The best way to see the future is to build it, not predict it. Remember what people were saying when RIP: Good Times [presentation] was making the rounds?”

Nivi continued to say that the market shouldn’t have any effect on the quality of ideas and product that entrepreneurs are churning out. “Investors may end up investing less, but that isn’t going to change the innovation coming out of real entrepreneurs. Entrepreneurs shouldn’t time the market as a strategy. Do your work, and the market will come around. If it doesn’t, we’ve got other things to worry about.”