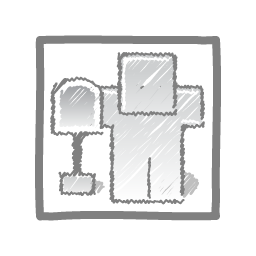 You really have to give credit to community news sharing site Digg for getting its act together. After the hatchet job that was the latest release of the site (version 4.0), Digg CEO Matt Williams and his team have realized that they have to take drastic measures to bring their lost audience back. This is especially true considering Digg’s once lofty $300 million valuation. Currently, the company sits at a $35 million valuation. It has $1.5 million in debt, and about five more months of runway left.

That said, none of what they have done in the months following the release of version 4 is groundbreaking or radical. If anything, Digg is still playing catch up with the competition. And, the new features (for the most part) are all just reinstated versions of old features that were stripped away when Digg v.4 launched.

For example, filtering by media type is a reinstated feature. Curated breaking news is a feature copied from the now-defunct Netscape/Propeller ( — you might remember Digg founder Kevin Rose criticizing Jason Calacanis’ decision to have curation on the site). The user activity notifications feature was added because of the success of friends’ activity feeds that once existed in version 3 (you could subscribe to RSS feeds for all types of activity for all types of users). Promotion statistics, which also existed in version 3, were removed and then reinstated.

And now we have the recently launched Newswire feature.

I’ve seen this feature described as radical and their best release in years when reading through several other tech industry websites. Fact of the matter is, this feature isn’t really new. The Newswire view existed on Digg from very early on (2003-2004, I believe), but at that time it was called Digg Spy. The feature was upgraded to Digg Spy 2.0 in 2005, and ultimately retired and replaced by Big Spy in 2008.

Back then, the Digg Spy feature was described as:

“You can choose the posts [that] are shown, newly submitted or promoted, dugg stories, buried stories and [those] with new comments. After loading, Spy automatically polls digg every few seconds for the latest site-wide activity. The Spy page is then updated via AJAX to show the latest happenings.“

Unless I’m mistaken, Newswire is the same feature that was retired in 2008, with some additional sorting (or filtering) options and now with bury data exposed to the public. In fact, why let’s compare the two features side by side: (Click to enlarge image) 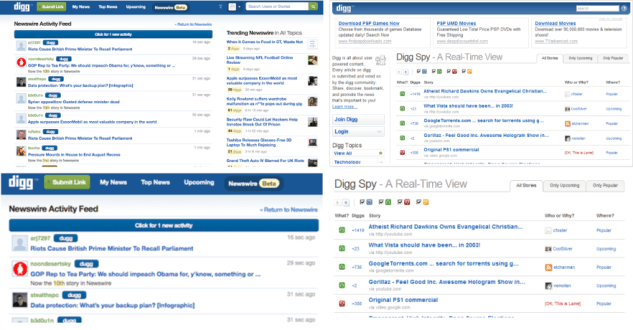 Digg’s original designer Daniel Burka even gave a reason for why they retired Digg Spy in 2008. Burka said:

“We built Digg Spy in the very early days of Digg, when the activity level was less frenetic than it is today and we could show a lot of the action through a live activity stream. It was great. You could discover new content and new people in a visual way that AJAX was just then letting us do. As Digg grew, Digg Spy became less and less representative of the breadth of activity on the site. We began showing ever-smaller percentages of the activity on the site in order to keep the stream from becoming a blur. Thus, Digg Spy became less informative.”

Whether or not the current Newswire fixes those problems remains to be seen. Additionally, the inclusion of bury activity is a curious decision. In the past Kevin Rose and others at Digg had mentioned that the reason why buried link submission data was never made public was to prevent retaliatory buries. We’ll have to wait and see whether this decision improves the quality of content on the site.

All of the feature additions from Digg are actually a good thing. But let’s be honest, all of them previously existed, were removed (regardless of the reason) and are now being reinstated. These features aren’t new to long time users of Digg and they certainly aren’t revolutionary or radical.

They are, however, features that never should’ve been removed in the first place.

Muhammad Saleem is a tech industry observer, social media strategist and former director of social media strategy at Tribune Co. At one point, Saleem was the second most active submitter on Digg.com. Since becoming a member in September 2005, he achieved nearly 2,800 front page submissions. You can contact him at MuhammadSaleem.com.