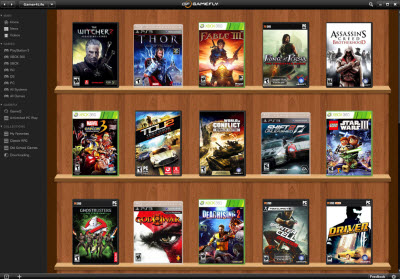 GameFly, the top video game rental subscription service, is following in the footsteps of movie service Netflix by launching a digital distribution business.

Customers can download the new digital client to their computers and download games for their Windows or Mac PCs. Active GameFly subscribers will be able to get free “unlimited PC play,” which allows them to download and play as many games as they want. Just as Netflix paved the way in movies, GameFly wants to develop a serious digital distribution business.

Sean Spector, GameFly co-founder and senior vice president of business development and content, said in an interview that the company worked on the new digital business for almost a year.

“We wanted to challenge ourselves to build the best client for customers,” he said. “We wanted to deliver hundreds of games and a social experience but not require a persistent connection.”

Los Angeles-based GameFly was founded in 2002 as a business that rented games to users by sending them disks in the mail, much as Netflix started out. Now it has more than 9,500 titles available for rental. GameFly almost went public in 2010 but pulled the offering. The company had revenue of $47 million in the third quarter of 2009, it said at the time. Backers include Sequoia Capital and Tenaya Capital.

But the business is starting to move online as rivals such as OnLive and Valve’s Steam launch their own competing digital distribution services. GameFly says it will have more than 1,500 Windows and Mac games for sale or rental via a desktop client. It will also provide a social network of sorts, with a live news feed and an archive of online high-definition trailers, videos and screen shots.

Spector aid the company has titles from more than 300 first-party and third-party game publishers. GameFly will launch a closed beta on Sept. 8. Subscription plans vary from $15.95 a month for one game to plans with two, three or four games at any one time. All of those users are allowed to use the online digital distribution for free. The company has more than 200 employees. Last year, the company said it had 422,000 users and it has not updated that number.