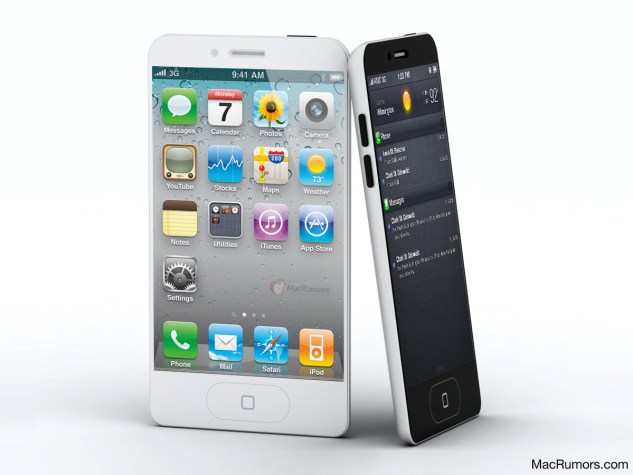 Just prior to the release of a major new Apple product, the internet typically becomes consumed with device mockups and plenty of heated speculation. A new set of iPhone 5 device mockups making the rounds could be giving consumers a glimpse of what’s to come on launch day.

MacRumors recently commissioned a professional set of mockup images based on leaked design specifications that are allegedly for the iPhone 5.

Not only do the images line up with previous interpretations of the handset, but they also have Chinese manufacturers hard at work on producing new iPhone cases, reports the site.

The design specs give precise measurements of the device as well as which portions need to remain open for power, audio/video inputs and button controls.  As shown in the photo above, specs call for a wide space near the bottom of the phone, which could indicate that the home button will take on a more horizontal, oval shape. The screen is also wider and the device itself has a tear-drop thickness — with the bottom end of the phone being the thinnest part.

Assuming the case design specifications are accurate, the commissioned mockup images will look very similar to the final product. Many are speculating that Apple will release the iPhone 5 by mid September in the U.S. and internationally by the end of October.

Personally, I think the iPhone 5 renderings are gorgeous. If these images are a glimpse into the future, I’d be more than willing to camp outside an Apple store for a chance to become one of the first people to get their hands on it.