Some Target and Walmart locations have lowered the price of the Nintendo 3DS a few days early, giving consumers a small window to buy the console for $80 less and get the 20 free games that Nintendo offered to early adopters who paid full price.

I thought the deal was so good that I needed to confirm it was real. I walked into my local Target this morning, went up to the games counter, and asked if the 3DS was now $169.99. The woman at the counter said “Yes, it’s not marked yet but it’s $169.” I purchased the console without hesitation. (Evidence of my purchase is at the bottom of this post.)

Target’s official corporate channel told us the $80 price drop was still happening on Aug. 12, but apparently some stores are not towing that line. Walmart did not immediately respond with confirmation.

Nintendo announced it would slash the price of the 3DS from $249.99 to $169.99 in late July after disappointing sales. The company, along with Sony, is facing a serious disruption in the handheld gaming industry from smartphone games, many of which only cost 99 cents. Even iPhone or Android games that cost $5 or $10 are easier to buy on impulse than a $30 to $40 title on the 3DS.

By drastically dropping the price of the 3DS five months after its release, Nintendo hopes to appease early buyers who paid $249.99 by offering them 20 free downloadable games. These include 10 free NES Virtual Console games on Sept. 1, including The Legend of Zelda and Donkey Kong Jr., along with 10 more Game Boy Advance Virtual Console games by the end of 2011, including Yoshi’s Island and Mario Kart: Super Circuit. Nintendo claims the GBA titles will be exclusive to early adopters.

With Target and Walmart trying to get a jump on sales, consumers have a serious chance to come out ahead. Any 3DS owner who wants access to the 20 free games must log in to the 3DS eShop before 11:59 p.m. Eastern Time on August 11. 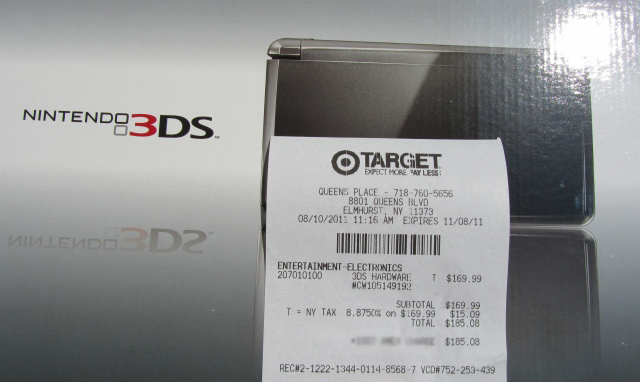 Will you rush out to grab a Nintendo 3DS?