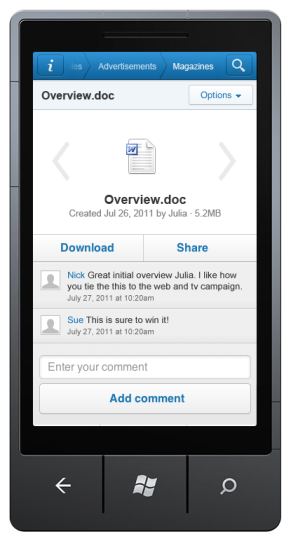 Cloud storage provider Box.net announced today that it is launching a web-based HTML5 version of its mobile application that will bring the company’s tools to any mobile device running an HTML5-powered mobile web browser.

HTML is largely seen as a powerful successor to Flash, a platform that powers most interactive web-enabled applications today. Box.net’s HTML5 app has the same functions that the rest of the native applications on smartphones and tablets have. But it has the advantage of working on any other mobile device that has an HTML5-powered browser without needing a native application. Most mobile devices today have a browser that can run HTML5 apps.

Box.net currently has 6 million users. Some 60,000 businesses employ its cloud-storage software, including 73 percent of Fortune 500 companies. That figure is up from around 66 percent in February.

“We’re not zealous about what the ultimate platform is, we just care about making sure our customers can access their content wherever,” Box.net chief executive Aaron Levie told VentureBeat. “At the same time, the long-term expectation and view we have is that a lot of these devices will become more standards based and let us focus way more on HTML5.”

This is one of the first times Box.net has devoted additional development resources to a new mobile platform. It led the company to add features to the mobile web application that weren’t even available on popular native applications like those on the iPhone and iPad. The company plans on devoting the most resources to the mobile platform that will get the widest deployment in enterprises, Levie said. In this case, he said he thinks it will be HTML5.

“You’ll typically see us leapfrogging our own apps as we can develop in one platform or another, so this time there is some enhanced functionality with the HTML5 mobile web app,” Levie said. “It’s slightly a knock against ourselves. For example, we don’t have search in our native iPhone app, but we have search integrated into the HTML5 app,” Levie said.

Outside of working developing apps that fit customer demand, the company will also develop applications for mobile devices if it can strike a good go-to-market deal with the parent company. It worked closely with Research in Motion to build an application for the Playbook, Levie said. 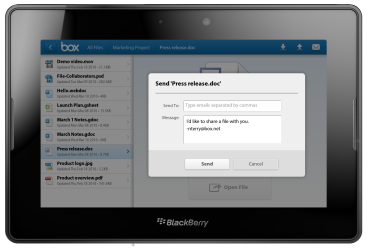 “We basically have a strategy where, if we can go to market with partners in an integrated way, we’re trying to build rich experiences for those platforms,” Levie said. “With the BlackBerry, we were able to work pretty closely with Research in Motion to get it to market, we’re gonna be doing a bunch of stuff with the Playbook with their sales and marketing staff.”

Box.net also released new applications for Android and for Research in Motion’s BlackBerry Playbook. The new Android application is optimized for tablets running the latest version of Google’s Android mobile operating system called Honeycomb. The application scales down to Android smartphones as well.