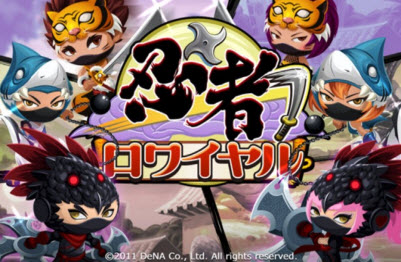 Japan is seeing a lot of action in the heavy rivalry between the two mobile social game networks DeNA and Gree.

DeNA announced today that it has launched its Mobage app, the Japanese version of Apple’s Apple Store, bringing its mobile social game network to iOS iPhone and iPod Touch users. Meanwhile’s Japan’s Gree made a strategic investment in UltiZen Games, a game developer and outsourcing firm in China. Mobage is DeNA’s mobile social network for game fans in Japan. If you think of this rivalry as Google versus Facebook, but in mobile games, then you wouldn’t be far off.

DeNA’s Mobage app is a big deal because the company has built up an audience of 30 million mobile phone users who pay a lot of money for apps and virtual goods, generating revenues for DeNA of $1.3 billion a year. But most of those users are on traditional feature phones, not newfangled smartphones like the iPhone. DeNA sees the writing on the wall, so it’s moving fast into smartphones; that was one of the reasons it bought Ngmoco for up to $403 million last year.

The Mobage app is a native iOS app, which will have more dynamic features available than the existing browser-based Mobage site. DeNA also launched a series of games on the Japanese App Store on Thursday: Solitaire, Reversi and Ninja Royale. DeNA launched a global English-language version of Mobage recently on the Android platform.

Gree’s move is interesting because it shows that it is also on a global expansion similar to DeNA. Gree has 26 million users in Japan, and it recently bought OpenFeint for $104 million to get a foothold in mobile social games in the U.S. It has alliances with Mig33 and Tencent as well. UltiZen Games is one of China’s largest browser and smartphone game development companies, with 450 employees in studios in Shanghai, Beijing and Tokyo. Gree will acquire 1.4 million common shares from UltiZen’s existing shareholders in a deal that is expected to close this month.

DeNA said recently that 42 percent of Mobage Japan users are over 30. The average revenue per user for smartphone Mobage users has been rising steadily, especially after mobile carrier billing was enabled. On average, the smartphone Mobage user spends 938 yen per month. That is $12.06 per user.