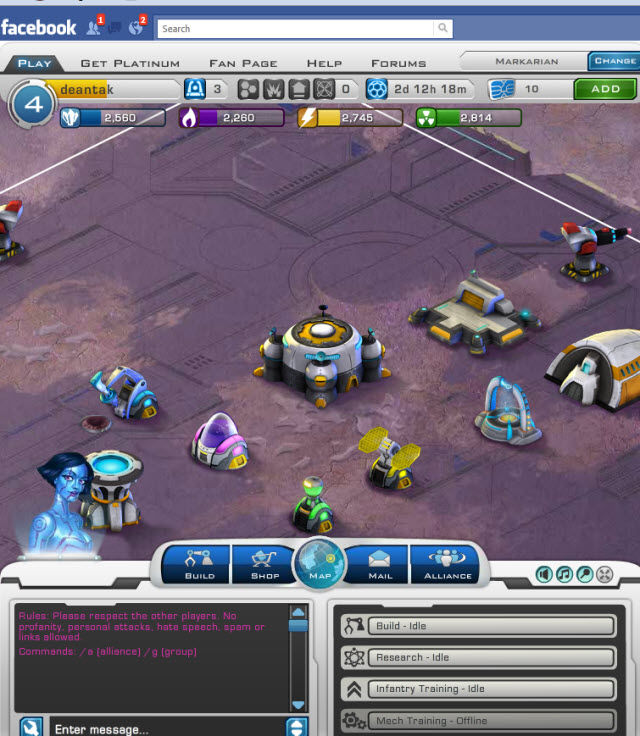 Slowly but surely, Kabam is turning social networks into platforms for hardcore games. The high-flying company has now launched its fifth major game on Facebook and the just-launched Google+ games platform: Edgeworld.

This real-time sci-fi game is a step up from Kabam’s earlier titles and it should keep the company on its trajectory of fast growth in the growing market for hardcore games on social networks, which have so far been dominated by more casual games.

The game has just been formally unveiled, but it has already raised a big controversy. Rival Facebook game maker Kixeye has accused Kabam of blatantly copying the design of Kixeye’s hit Backyard Monsters, with similarities in game play and objects, with differences only in the genre. Kabam says it has done original work in creating Edgeworld. 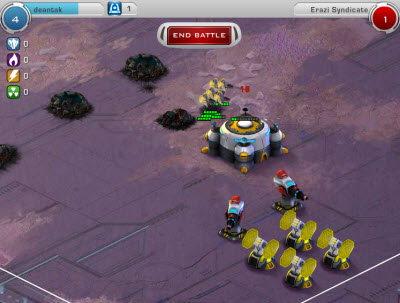 It is seemingly primitive games like this one that are making Kabam a credible threat not only to Zynga — which has  265 million users compared to just 12.9 million for Kabam — but also to giant hardcore console game makers such as Activision Blizzard.

The thing about Kabam’s users is that they play their games for a long time. 90 percent play six or seven days a week for hours at a time. And they also buy a lot of stuff, giving Kabam one of the highest average revenues per user in the social game market. We don’t have numbers for sure, but we would hazard a guess that Kabam’s stats on average revenue per user (ARPU) look pretty good compared to Zynga’s, as Zynga relies on getting lots of casual gamers in order to find a small percentage that are willing to pay a little bit of money.

Redwood City, Calif.-based Kabam has discovered that there are hardcore gamers on Facebook and they are willing to pay much more than usual to beat their friends at social games that are graphically simple but still have a lot of depth as strategy games. That is why it has grown its following from 7 million in May to 12.9 million today. And it’s also why Kabam raised an astounding $85 million in May, bringing its total funding to $125 million to date. Kabam has grown to 425 employees and they’re all working on titles like this one.

Andrew Sheppard, chief product officer at Kabam, says his company doesn’t design for “virality,” or rapidly spreading a game as fast as possible, like other companies have done on Facebook. Rather (in a talk at the recent Casual Connect game conference), Sheppard said that Kabam focuses on high revenue per user, quality, retention rates, frequent returns, a higher percentage of paying users, high quality customer support, and more transactions per user. Each game is designed to spur the competitive gusto in each person.

James Holloway, head of the Edgeworld team, said in an interview that the game combines real-time tactics and interactive combat. It is on the spectrum between more static games like tower defense games and the more graphically rich and fluid real-time strategy games such as StarCraft. Kabam’s previous games are more like empire-building games. But this one allows you to drop individual space soldiers into an enemy’s base and watch the combat play out in real-time.

The graphics of the game are far behind what is possible on high-end PCs, which can display titles such as StarCraft 2 in stunning detail. No hardcore gamer is going to get overly excited about how the isometric two-dimensional scenes look. 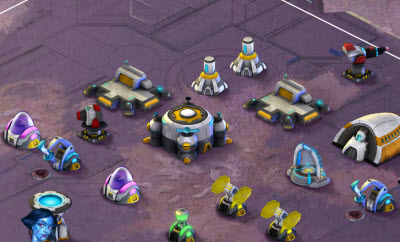 But the graphics in Edgeworld use a brand new game engine and are a cut above Kabam’s earlier titles. That’s what will matter to fans of earlier Kabam games such as Global Warfare, Glory of Rome, Dragons of Atlantis and Kingdoms of Camelot. Holloway said his team members are fans of games like Age of Empires, StarCraft, Command & Conquer, Dune 2, and the Ancient Art of War. Edgeworld is an homage to those kinds of games.

“Our grand vision was to make a 4x game,” Holloway said, where the “x” refers to extermination, exploitation, exploration, and expansion. It’s like an empire-building game with much better combat. The game has its own sound effects and music. In the battles, you can see tiny projectiles fly and hear gunshots. But the game runs in a browser using Adobe Flash technology.

The game is a lot like other Kabam games in a social sense. You can chat with friends and join alliances. The alliances can engage in diplomacy or stage massive wars against groups of players. The title also has a more complex story than most Facebook games. In the title, you are the former manager of a “Galactic Union” that consisted of different alien races. You are at war with the Cerulean race and land on their home planet. But once there, you find there are only ruins and the Ceruleans are gone.

The union breaks into separate factions that grab different territories. You command one faction and try to defeat the other factions. But somewhere along the way, you’re going to find out what happened to the Ceruleans. You get advice from an artificial intelligence character named Kira about what to do. Your job is to build a base, gather resources, build an army and attack the rivals. 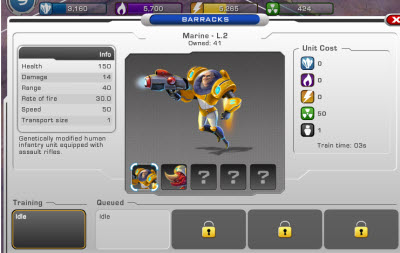 Combat happens through openings called “warp gates.” They stay open for five minutes and you can launch a small number of soldiers or units through the gate at any given time. You can place the landing zone of your soldiers inside the enemy’s base, but after you do that, you have to sit back and watch to see if your soldiers can take out the base’s defenses. The order you place your soldiers in makes a difference, as it is best to put tanks first and then have long-range weapons lob shells at the enemy from behind that protection.

There are about 140 missions that you can go on and earn achievements for. You get experience points for completing missions and destroying enemy buildings. The resources are distributed in a way that you have to make alliances or work with friends.You can attack the rival AI factions or try to take on real human players. To defend your base, you have to set up your gun turrets properly.

Holloway said the game has been launched and is in the midst of a 90-day window when the company collects player behavioral data and tweaks the game to make it more fun. It will formally launch in the next few weeks, but it is available now for users to try out. It takes a long time to build things in the game, but if you want to speed things up, you can pay real money to do that.

“Over time, you’re see a story unfold in this game,” Holloway said. If it takes off, then Kabam’s story will get better and better.

Overall, Kabam is getting better at building games. Global Warfare, which launched in May, is now Kabam’s biggest game with more than 4 million users.

The company has come a long way. Kabam was founded in 2007 as Watercooler and funded by Betfair and Canaan Partners. Kevin Chou, chief executive and co-founder, said the company had around 20 employees for quite a while as it experimented on Facebook, making sports fan pages and sports games.

But the time came to pivot into deeper experiences on Facebook and Google+. Kabam had its first real hit with its first major role-playing game, Kingdoms of Camelot, which quickly pulled in millions of users. The game still has 1.7 million monthly active users about two years months after its launch. Kabam also acquired WonderHill, a San Francisco game company that developed Dragons of Atlantis (which is also available on Google+), which has become Kabam’s most successful game to date. You can expect Kabam to buy more companies in the future.