The King of Code contest is sponsored by Windows Phone and is open to developers on any mobile platform.

Game developer P.J. Snavely got his start at age 9 hacking into published games on his Commodore 64. Today, he has 15 games of his own under his belt, including a No. 1 title in the iPhone Kids category.

After graduating with a degree in computer engineering from the University of South Carolina, Snavely cut his teeth at Stormfront Studios working on high-profile console franchises like Tony La Russa Baseball and Andretti Racing. After that he took his sports game skills to Acclaim Games (acquired by Playdom), where he worked on the top-selling All-Star Baseball series, and Sony, where he broke new ground developing an NBA series for PlayStation Portable.

Now he’s immersing himself in mobile, with a dozen iPhone creations already in the field, and a Windows Phone application in preproduction.

His current iPhone apps fall into family-friendly genres like puzzle games and time management helpers. His two favorite projects include Solution Zero, a unique take on Sudoku, and Kidz Kitchen, a kid-friendly memory game that saw a substantial number of downloads. 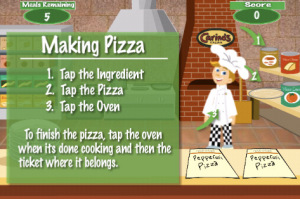 “I started out on the iPhone because I was very interested in dealing with a standardized platform like I’d been used to working with on the console side,” Snavely told VentureBeat. “I wanted my initial mobile development to be less about compatability and more about design.”

Now that he’s established himself in the space, he’s looking forward to branching out to Windows Phone. So far, he says he hasn’t encountered any development or compatibility issues and expects his first WP platform app to “be a genre-smasher.”

“This current development takes the best elements of seveal platforms — mobile, social and console — to make a uniquely addicting experience,” Snavely said. “It builds on the most interestign pieces of those platforms: user generated content, geolocation gameplay and the viral mechanics of social gameplay.”

Working on the PlayStation portable provided Snavely with the perfect segué to get more involved in mobile, which is where he believes “the future growth of the [gaming] industry is going.” He loved developing for PSP, he says, but felt restricted.

“The beauty of mobile is the fact that you’re constantly carrying your gaming platform with you,” he said. “The idea of the so-called ‘hardcore gamer’ is falling by the wayside. Games that are good enough and interesting enough are turning everyone into gamers.”

While he thinks that consoles will still be a major pillar of the gaming industry, Snavely said that he expects mobile to grow explosively, especially given Microsoft’s projected growth in the sector.

For now, he is bootstrapping his development efforts, pushing his own products and helping out on others’ games to generate revenue. But he’s definitely on the lookout for funding, confident that with even minimal backing he’d be able to build a vibrant social mobile business.

“As a 15-year game industry veteran, I know what it takes to make a game fun and successful,” Snavely said. “Throw in my love of the social and mobile spaces and I think what I’m putting together will continue to evolve user experiences and gameplay for both of those sectors.”