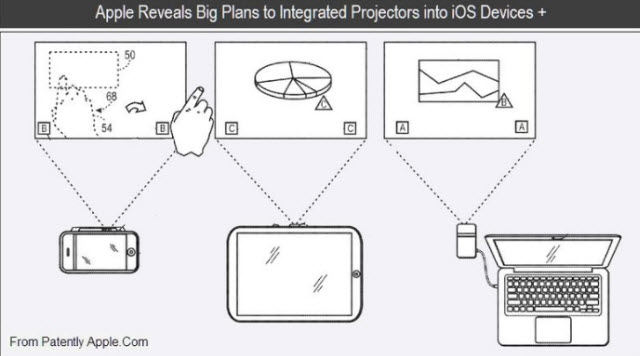 Some patents filed by Apple suggest that the company is going to put small projectors into its coming generations of iPhones.

Patently Apple reported that Apple has applied for a patent on integrating pico projectors (as the small projectors are called) into future iOS (iPhone, iPad, iPod Touch) devices, as well as future MacBooks. That could turn out to be a major feature that sets Apple devices apart from the competition, at least for a time. The issue is going to be how much it costs to integrate these projectors into small devices.

Apple hinted that it was planning to integrate projectors into iOS devices as far back as June 2009. But the patent application unveiled today reveals more detail than ever on how the projectors will work. The application suggests that devices will be able to interpret shadow and silhouette gesturing associated with presentations in a darkened environment. The extra detail suggests that Apple’s development teams are racing ahead on the integration. The presentation features could make something like the iPhone or the iPad even more ideal for the enterprise.