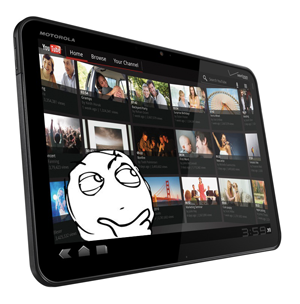 Android-based tablets have wrested away 20 percent of worldwide market share from the Apple iPad in the past 12 months, according to ABI Research.

Tablets running versions of Google’s Android OS include the semi-popular Samsung Galaxy Tab and Motorola Xoom (left), and today saw the release of a new one, with the Acer Iconia Tab A100, the first 7-inch tablet running the latest Honeycomb version of Android. The sheer variety of Android tablets available, with different price points and features, makes it possible for these tablets to hit all segments of the market.

“If we look at Apple, they want to deliver one form factor,” Kevin Burden, vice president of mobile devices for ABI Research, told VentureBeat. “But with Android, manufacturers can differentiate and offer it at lower prices. The value of Android is choice.”

The Android tablet market growing similarly to how the Android smartphone market grew a few years ago. But despite the variety of tablet offerings, there is less demand for tablets than phones. Because of those two factors, no single tablet has had stand-out sales, and none of the tablets can compare sales-wise with the iPad, said ABI.

“Many vendors have introduced media tablets, but none are separating themselves from the pack to pose a serious threat to Apple,” said Jeff Orr, ABI Research mobile devices group director, in a statement. “In fact, most have introduced products at prices higher than similarly-configured iPads. Apple, never a company to be waiting for others, has introduced its second-generation iPad media tablet while keeping product pricing unchanged.”

Orr said consumers look somewhat less favorably on the Android tablet segment because of OS fragmentation and the introduction of lower-cost units that have fewer features.

“De-featured, low-cost media tablets are being introduced by more than 50 vendors in 2011,” Orr said. “This will certainly help bolster year-over-year growth for the category, but it also creates a negative perception in the minds of the mass consumer audience about the readiness of media tablets to be fully functional within the next several years.”

Although consumers may not favor Android tablets over the iPad, Android tablets’ market share could still rise considerably. Gartner projects that in 2015 the iPad will have 47.1 percent of the tablet market, while Android will jump to 38.6 percent. While I’m sure Google would like even higher numbers, those would be fairly big gains if the projection turns out accurate.

Do you think Android tablets will continue to rise up in market share? Could one end up seriously challenging the iPad?